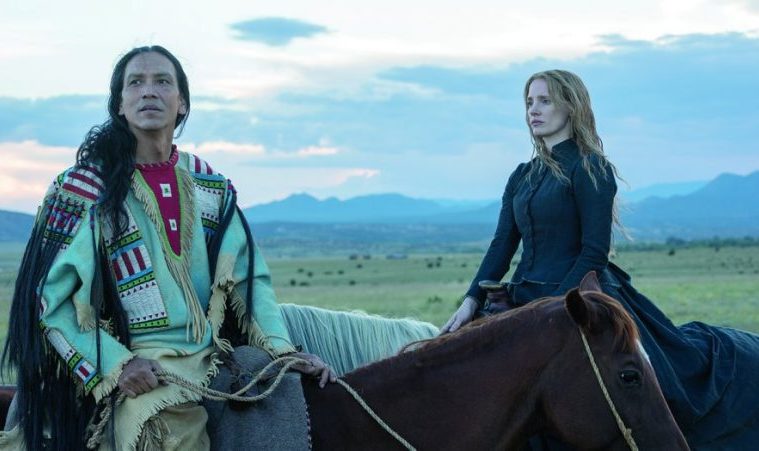 She may only have two films this year, with the highly-anticipated Miss Sloane arriving soon, but Jessica Chastain is gearing up for a major 2017. Along with new films from Xavier Dolan, Aaron Sorkin, and Niki Caro, the actress is leading a 19th-century period drama titled Woman Walks Ahead. The first image has now arrived for the drama based on a true story, courtesy of THR.

Directed by Susanna White (who last helmed this summer’s John le Carré adaptation Our Kind of Traitor), the script by Steven Knight (Eastern Promises, Locke) follows Chastain’s character as she leaves Brooklyn and heads to theStanding Rock Reservation in the Dakotas to helped the plight of a Sioux chieftain (Michael Greyeyes) to fight for his land.

As we await acquisition news or a festival premiere date, check out the full synopsis below for the film financed and produced by Black Bicycle Entertainment alongside Bedford Falls in association with Potboiler.

In 1889, widow Catherine Weldon (Academy Award® nominee Jessica Chastain) leaves behind her unsatisfying life in New York City to pursue her dream to be a painter, and bravely travels alone to the Dakota Territory, with the goal of painting the infamous Sioux chief Sitting Bull. Despite his fearsome reputation, Catherine is surprised to discover that Sitting Bull is a more complex and intriguing man than she expected to find, and their relationship grows and deepens. But as the U.S. government plots to force the Plains Indians to abandon their land and move onto reservations, Catherine, Sitting Bull and the Plains Indians will be swept up in the dramatic and violent history that will end with the devastating battle at Wounded Knee. From Academy Award® nominated writer Steven Knight, comes a beautiful story about love and legacy, set amidst the epic backdrop of the Native American struggle against the US government’s takeover of their land.

Woman Walks Ahead will likely premiere in 2017.