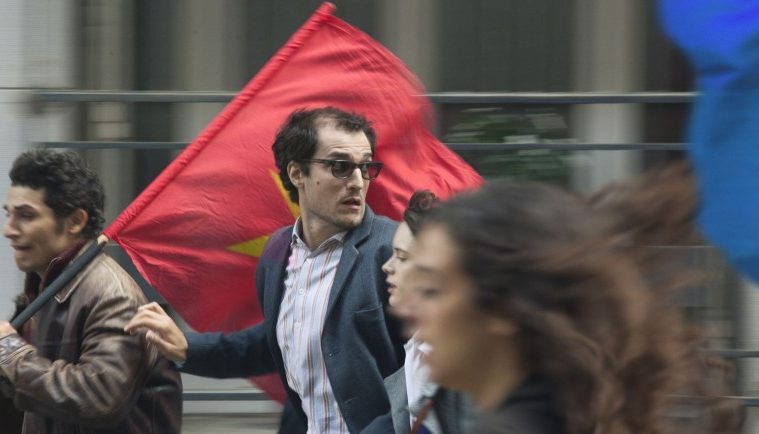 While Jean-Luc Godard is currently working on his next feature film, the legendary director will also be the subject of a new biopic this year. After taking on the silent era with his Best Picture-winning The Artist, Michel Hazanavicius followed it up with the little-seen The Search, and now he’s back, portraying the French New Wave icon in Redoubtable.

Featuring Louis Garrel as Godard and Stacy Martin as Anne Wiazemsky, the film depicts their relationship within the director’s late-60s “revolutionary period,” beginning with the production of his Mao-centered La Chinoise. Based on Wiazemsky’s memoirs Un An Après, the first teaser has now landed, which takes on a Godard-esqe color palette before introducing our lead.

Considering how little Godard himself approves of the idea of the film — “Oh, to even hear about it do not want to! I do not like it. Although, in fact, do not care. Stupid idea, stupid,” he said — Hazanavicius is certainly fighting an uphill battle to win us over. Ahead of a likely premiere at Cannes, check out the the teaser below (via The Playlist) for the film also starring Bérénice Bejo.

Paris 1967. Jean-Luc Godard, the leading filmmaker of his generation, is shooting La Chinoise with the woman he loves, Anne Wiazemsky, 20 years his junior. They are happy, attractive, in love. They marry. But the film’s reception unleashes a profound self-examination in Jean-Luc. The events of May ’68 will amplify this process, and the crisis that shakes the filmmaker. Deep-rooted conflicts and misunderstandings will change him irrevocably. Revolutionary, off-the-wall, destructive, brilliant, he will pursue his choices and his beliefs to the breaking point… As he did with The Artist, Academy Award® winning director Michel Hazanavicius delivers another tribute to classic cinema, both wildly funny and deeply moving.