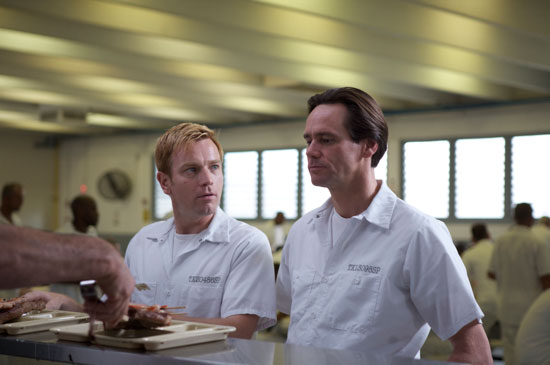 It’s been a long and difficult road for I Love You Phillip Morris. After its showing at Sundance back in January of last year, it embarked on a series of delays due to distributor issues as well as a lawsuit filed by producers EuropaCorp. When all hope looked lost, in came Roadside Attractions (the distributors behind Winter’s Bone and The Cove, amongst others) to save it from purgatory. Come December 3rd, the movie will finally see release in the United States and the promotion has begun with both an official poster and a red band trailer released. Now, the official theatrical trailer has come out and you can check it out below courtesy of Yahoo.

Synopsis: I Love You Phillip Morris tells the (based on true events) tale of Steven Russell (Jim Carrey), a man happily married to Debbie (Leslie Mann) until a serious car accident leads him to reassess his life. Soon, he’s an openly gay con man, who winds up in jail, where he meets and falls for Phillip Morris (Ewan McGregor). The two’s love inspires them to attempt a prison break that leads to a string of improbable and hilarious cons.

In all honesty, if you want a better idea of the humor and tone of I Love You Phillip Morris, you should probably watch the red band trailer instead. With the restrictions of green band, the film’s more racy elements have been cut out in order to appeal to the masses and appease the holy lords of the MPAA. Regardless, watching this trailer has increased my excitement to finally see this long-delayed project. Maybe after this, Jim Carrey can finally get some respectable work again. Fingers crossed.

What did you think of the trailer? And if you’ve seen the red band, which of these trailers do you prefer?