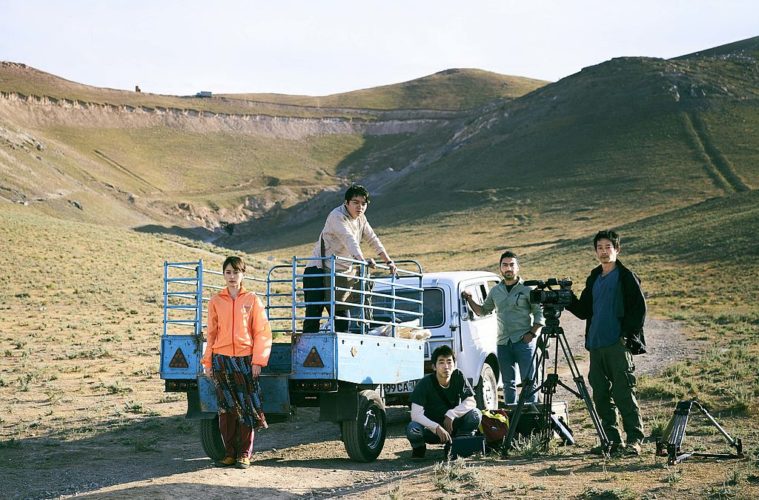 We’re approaching springtime, which means the first looks at what will likely premiere at Cannes Film Festival begin to see the light of day. One of the sure bets is the latest film from Kiyoshi Kurosawa, who recently impressed with the sci-fi drama Before We Vanish. His next film is To the Ends of the Earth (Sekai No Hate Made), which he shot in Uzbekistan and follows a cautious Japanese TV host whose worldview changes when she ventures to the Central Asian country to shoot a segment for her travel show. The first pair of teasers and a poster have now arrived for the film, which arrives in June in Japan.

“The once-great Timurid Empire has fascinated me for decades. Today, the nation of Uzbekistan exists in the very same part of the world. Now I’m going to shoot a film in the middle of the silk road with a cast and crew I admire very much, and a theme which is personal to me,” Kurosawa said before production. “To the Ends of the Earth will surely be unlike any film I’ve made thus far. It’s more than one dream coming true at the same time.”

See the first teasers and poster below via Cinemaldito.

Yoko hosts a popular global travel show, but despite her job she’s cautious and insular like many young Japanese. But she has a bigger dream. On her latest assignment, in Uzbekistan, Yoko and her small team attempt to catch a mythical fish but fail. They film other segments in Samarkand, but feel they need something more special. Indifferent, Yoko prefers to text with her boyfriend in Tokyo. One night, she comes across a tied up goat and suggests freeing it on camera. The goat’s release doesn’t go as planned and Yoko feels indignant and naive. The team move to the capital, Tashkent. Yoko wanders into the opulent Navoi Theater and falls into a fantasy-like state. The next day she confides her future ambitions to her cameraman but admits her heart isn’t ready. Later, at the massive Chorsu Bazaar, Yoko’s timid nature inadvertently gets her in trouble with the police. At the police station, she hears of a disaster in Tokyo and realizes how important human communication truly is. Some of the team return home to cover the news but Yoko stays. As Yoko continues her Uzbekistan odyssey, her heart is set free.