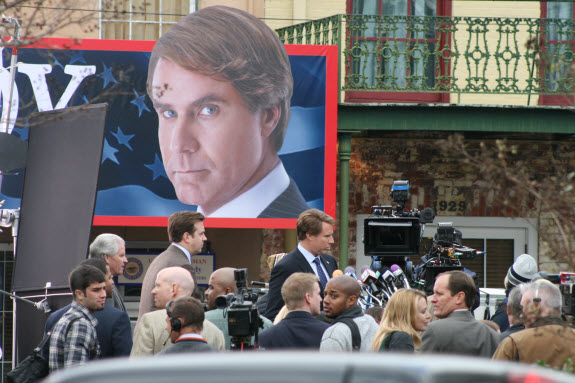 Yesterday we brought you the first look at Burt Wonderstone, a comedy featuring a stellar ensemble icluding Steve Carell and Jim Carrey. Another comedy production is currently underway which boasts a similarly excellent cast and we have the first look.

Coming from OLV, Jay Roach is filming the political comedy Dog Fight in New Orleans we can see the first image of Will Ferrell and Jason Sudeikis above. They are joined by Zach Galifianakis, John Lithgow, Dylan McDermott, Brian Cox and Dan Aykroyd in the comedy that follows “two rival politicians (Ferrell and Galifianakis) running for a congressional seat in a small North Carolina district election.”

Through his many SNL sketches, Ferrell has also shown he can nail the politician role, so I look forward to it in feature mode here. My hope is this is the perfect comedy antidote to George Clooney‘s The Ides of March. It’ll also be great to see if Dan Aykroyd has more than just a cameo, as I’ve been looking for his return since Ghostbusters III will never, ever, ever happen.