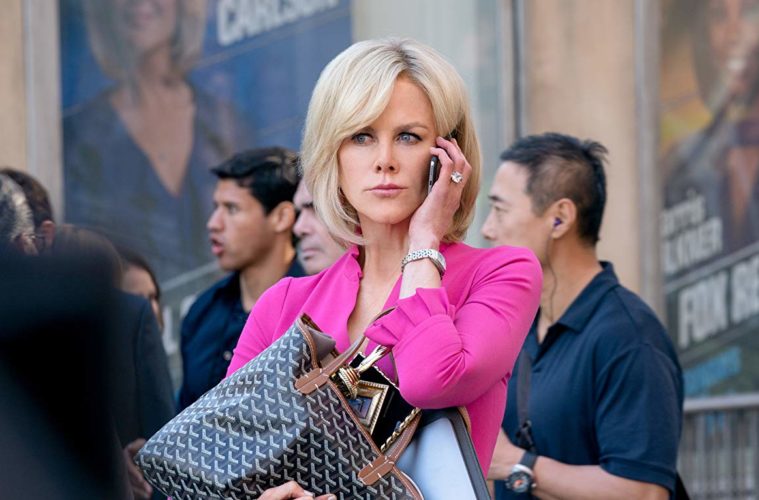 Though it now seems like the pipedream of a bygone era, there was once a precious time in the not-too-distant rearview mirror of American politics when politicians were actually held accountable for their words, if not always their actions. We all remember those wide-eyed months leading up to Election Day 2016, before the acid rain-laced fog of normalization set in, when it seemed like any one of the now leader-of-the-free-world’s rhetorical and tangible parade of sickness would crater his political aspirations—surely the Access Hollywood video would be that proverbial nail in the coffin, right? “This is it—any day now, he’s a goner” we thought with crossed fingers and blessed naïve hearts, waiting for the reckoning that would save us all from our surreal collective nightmare. After all, it doesn’t take a feat of imagination to consider the consequences of any other president or candidate invoking the menstrual cycle of a female journalist as retaliation for being challenged—the scandalous downfall and tainted legacy that would befall that administration or campaign.

This aforementioned comment, a-now infamous display of humiliated, sexist petulance that followed the first Republican Presidential debate in the summer of 2015, was aimed at then-Fox News anchor and debate moderator Megyn Kelly, shortly after Kelly used the debate’s national stage to air the Republican frontrunner’s misogynistic laundry. The context and fallout of this headline-making exchange are set up early in Bombshell, Jay Roach’s new zippy yet trenchant account of the sexual harassment scandal that befell Fox News and brought down the career of its CEO and propagandist mastermind Roger Ailes (a lumbering and lecherous John Lithgow). One mustn’t forget that all this went down before the days of MeToo—when #TimesUp was but a whisper—and the irony of the then-burgeoning movement getting its wings at a fiercely conservative institutional behemoth is not lost, and speaks to the universality of workplace sexism. And while the past few years have unfortunately illustrated our most powerful politician’s imperviousness to #MeToo, fortunately there has been a sustained and long overdue reckoning within the media and entertainment landscapes—and it arguably all started with one Gretchen Carlson.

Played with cunning competence by Nicole Kidman, Carlson joins Megyn Kelly (Charlize Theron) and the fictional Kayla Pospisil (Margot Robbie) as the film’s starring triptych—though it’s arguably Theron’s severe and gravel-voiced Kelly, and Robbie’s neophyte Pospisil who respectively serve as Bombshell’s narrative and emotional axis, a somewhat surprising set-up given Carlson’s foundational role in Ailes’ fall from (dis)grace. Outfitted with pointed facial prosthetics, Theron’s uncanny evocation of Kelly adds a level of authenticity that soberly balances out the sometimes winking casting and gimmicky portrayals of other Fox personalities that are seen in the film (it’s more than a little distracting, for example, when the introduction of Geraldo Rivera or Richard Kind’s Rudy Giuliani draw riotous laughter from the audience). Bombshell faced a tricky proposition from the outset; accurately portraying these women as sympathetic targets of systemic harassment and laud their eventual role in Ailes’ ousting, without painting them as heroic or blameless martyrs. After all, both Carlson and Kelly were complicit in the network’s years-long culture of silence, and because they too had been on the receiving end of Ailes’ abusive behavior, they knew all too well how the predatory machine kept chugging along—to say nothing of their problematic and often toxic strain of conservative politics.

For the most part, Roach and screenwriter Charles Randolph (The Big Short) deftly circumvent these traps by reminding us of Carlson’s socialist fearmongering, as well as Kelly’s ridiculous assertion on-air that Santa Claus is of course white—a stance that would be amusingly bizarre if it weren’t so egregiously ignorant. Further complicating our perception of Megyn is the fact that throughout, she is keen to remind everyone that she is most definitely not a feminist, and disregards the very thought of her being even remotely associated with that label. Her hostile contempt for the optics of female empowerment and gendered social justice is most crystallized in her reluctance to show solidarity with Carlson by coming forward with her own experiences of harassment. Kelly does have a point, for more often than not when female public figures speak out, they’re not only smeared in sexually degrading fashion, but their achievements are then re-contextualized through a lying, victimized or harlot narrative, and their achievements dismissed as merely transactional. In fact, Kelly is justifiably anxious that were she to come forward, she’d only be remembered as the woman who was propositioned by her boss.

Yet by 2016, the year Carlson came forward and Kelly was faced with this conundrum, the latter was privileged enough to be one of the few women working at Fox who had the power, the voice, and the leverage to levy these accusations in any meaningful or consequential way, unlike a figure like Kayla who serves as a fictional composite for all the silenced interns, production assistants, and low-level staff who had no one to trust and nowhere to turn. A self-described “evangelical millennial” hailing from a Fox News-worshipping household, Kayla is a peppy striver whose palpable competence is matched only by her enthusiastic ambitions. Thrilled that she was able to finagle her way into a private meeting with the head honcho, her brainstorming session with Ailes quickly sours into a queasy display of what happens when powerful men weaponize and exploit the ambitions of young female professionals. It’s uncomfortable enough—especially to us weary viewers who’ve become hardened after MeToo—that Ailes asks her to stand up and twirl in front of him like a ballerina box figurine, as he looks on with ravenous and drooly entitlement. Slightly confused by his random request, the innocent and trusting Kayla nonetheless complies, but as Ailes continues to insist that she hike up her dress “higher,” Robbie’s doe-eyed look of well-intentioned eagerness to not disappoint her boss begins to crumble—and by the time her white underwear becomes visible in the frame, subject to Ailes’ lascivious and leering gaze, Robbie heartbreakingly registers the wounded mortification that begins to feebly wash over Kayla’s dismayed and helplessly horrified face.

It’s one thing to hear breaking news reports about executives’ auto-locking office doors and sexual propositions, but it’s a completely different beast to witness such dastardly abuse of power with our own eyes, in real-time—the abrupt and surreal anachronism of seeing sexuality be invoked in professional spaces, let alone with such unwarranted and nonconsensual intimacy. It is in this scene, midway through the film, that Roach really plunges us into the behind-closed-doors reality of the visceral violation belying every headline—the behavior we hear about but don’t see—and as our proxy, Robbie’s Kayla wrenchingly communicates the internalized shame, disgust, self-hatred, personal devaluation and immobilized lack of agency most women feel after being more or less coerced into surrendering while isolated, and with their guard down. Here too, Bombshell effectively conveys the nearly impossible moral dilemma women who want to be recognized for their merits and talents face when their ambitions are used against them, and how standing up for oneself can mean throwing away a lifetime’s work—the helpless and impotent outrage of it all. We understand Kayla’s guilt and her feeling filthy for giving in—because we’ve now seen that it wasn’t really much of a choice, since these moments are designed to corner women when they’re at their most vulnerable. And while we’d all like to sanctimoniously imagine that we’d furiously storm out if ever confronted in this situation, the scene’s emotional immediacy and Robbie’s empathetic navigation of it humbly forces us to take stock of the sad reality that freezing up and capitulating is not only all too common, but very human. As the experience of another real-life former Fox anchor shows, flexing one’s integrity and refusing comes with an extremely hefty professional price tag.

However, Bombshell also emphasizes the difference between surrendering as an act of professional self-preservation, and the silence of self-interested careerists like Jeanine Pirro and for a long time, Carlson and Kelly. Powerful men like Ailes knew how to preside over a toxic environment that pitted the aspirations of women against each other—fueling the competitive, paranoid resentment that lingered in every corridor and conference room. Yet even with figures like Pirro and Kimberly Guilfoyle who always chose the path of least resistance and were vocally “Team Roger” when given the chance to do the right thing, Bombshell lays out the psychology that drove many of these women to support Ailes, for he did in fact use his power and connections to help them in their careers. Yet his benevolence was deeply cynical and strategic, for Ailes knew how to complicate the narrative by capitalizing on his role as mentor and friend—and we see this explicitly play out in Kelly’s conflicted feelings about turning her back on Roger, whom at this point she considered to be a friend. When one is conditioned into thinking that society’s fewer opportunities for women is the natural order of things, cutthroat competition is encouraged and inevitable—at one point, Carlson says the reason the network’s on-air female talent dress so similarly is to serve as a reminder that they’re all fungible “soldiers”—to the point where a Stockholm sense of gratitude and deference is given to the (usually male) authority figure believed to be the only path to surmounting the status quo (this gaslighting narrative that ascension solely based on a young woman’s merits and moxie is impossible, is a conversation for another day). In a dog-eat-dog world, those who dole out scraps are seen as benevolent providers, merciful in their generosity—and to remain one of the “chosen” few means burning bridges.

If this all sounds very cynical, that’s because it is. In fact, there’s something about the packaging and selling of information that’s inherently cynical—especially for those on TV, who, without the anonymity or faceless buffer offered in print, are in a way presenting themselves as commodified vessels for the dissemination of that information. Randolph’s screenplay suggests that the most cynical aspect of the news business lies in access journalism; the willingness to forgo ethical integrity in exchange for proximity to power. This idea of cynicism as the primary corrupting influence on one’s moral compass is directly addressed in a scene set in a control room with Kelly and her husband, who are at odds over the conciliatory interview she just gave with the candidate whose comments precipitated a wave of death threats over their family. Whereas Kelly believes she held her subject’s feet to the fire, her husband Doug (Mark Duplass) begs to differ, arguing that Kelly was too “solicitous”—and rather than disagree with this assertion, she defensively retorts that she needs access to the presidency, because this is their bread and butter.  Money is quite a smooth talker.

Although Bombshell is rather straightforward, it accomplishes its goal of telling this story with sufficient nuance, humor, and depth—with the ensemble performances doing much of the heavy lifting in service of pathos. From the furtive glances and hushed tension permeating this corporate climate of distrust and paranoia, to the frequent use of close-ups that bring each character’s alienated faces to the fore, Roach and Randolph adequately balance the film’s elements of parody with earnest verisimilitude and raw emotion. There are valid arguments to be made that Bombshell lets these women off the hook too easily—and indeed, there are some winking moments of caricature and facsimile that teeter dangerously into revisionist territory—but these are almost exclusively reserved for peripheral characters. Challenging our perceptions and comfort zones, Roach is hoping that we don’t get too caught up in the politicized specifics that we miss its universal social truths. It’s amusing to consider that perhaps the director’s even-handedness is his way of slyly nodding to the delusions of Fox News’ erstwhile “fair and balanced” self-seriousness.

Bombshell is now in wide release.