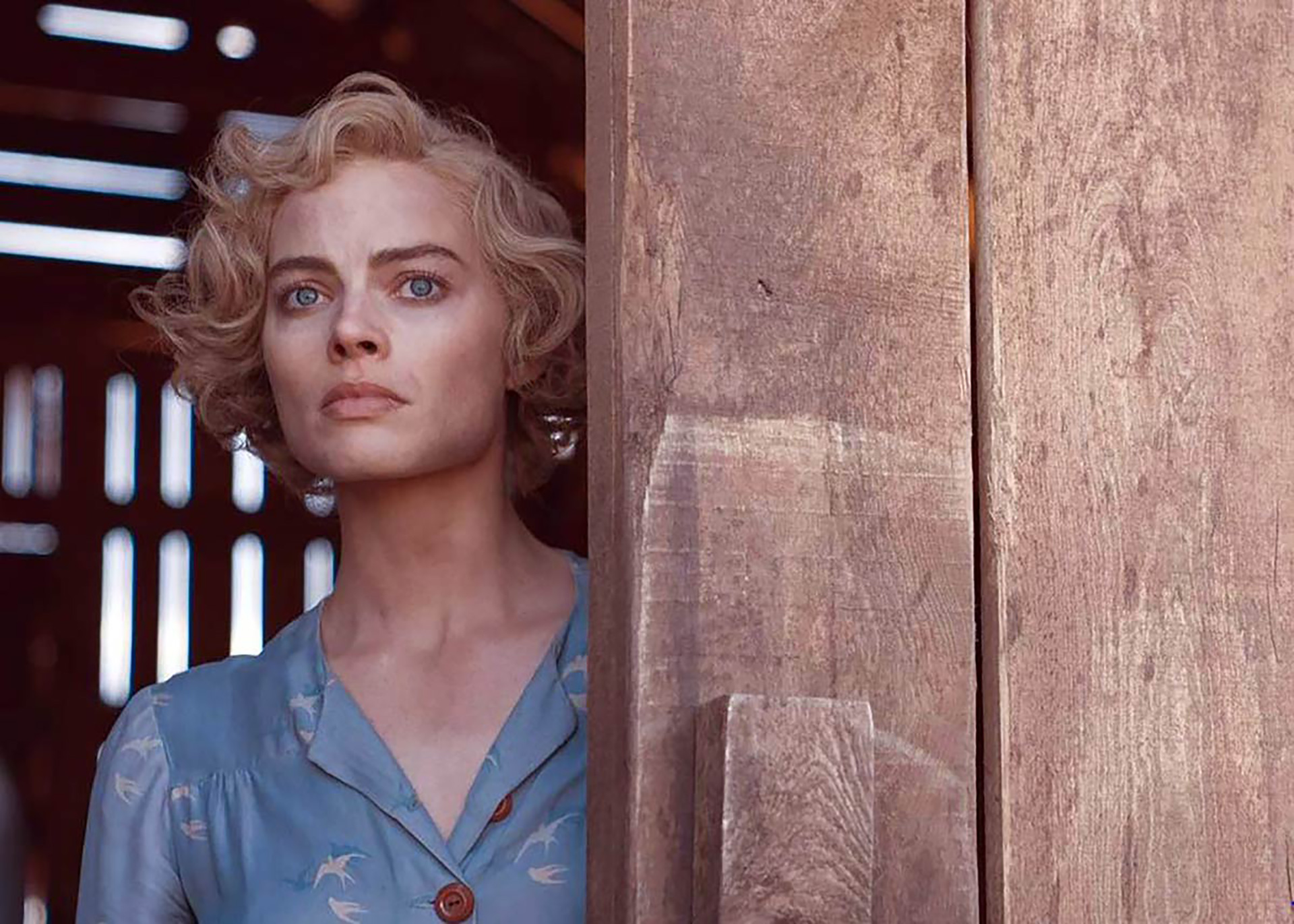 Eugene’s (Finn Cole) father used to say about their Bismarck home, “This place is cursed.” It didn’t matter that it’s where he and his wife Olivia (Kerry Condon) settled with a bunch of other families. He simply never thought any good could come from trying to make a life there. So he left. Olivia and Eugene stayed. Dust storms swept through the land destroying crops, farms, and hope. And the banks arrived with foreclosure after foreclosure. Olivia Baker eventually became Olivia Evans, her new husband George (Travis Fimmel) became a deputy sheriff, and along came little Phoebe (Darby Camp) as they still struggled to survive. That’s all before a dangerous outlaw entered the frame with a $10,000 bounty that everyone saw as solution.

Could Allison Wells (Margot Robbie) be the person to change their lives? Could her capture inject enough money into their community to hold the creditors at bay for one or, maybe, a handful of homesteaders in desperate need? Or was she simply one more example that proved the cursed nature of that place—especially for the Baker bloodline?

Because as easily as a now seventeen-year-old Eugene and his best friend Jo (Stephen Dinh) might change their fortune by finding her before the authorities, that outlaw might find him first and draw him into something else entirely. Comic book criminals and their adventurous lifestyles have always enamored Eugene. Appeal to that fantasy by offering another life and he may fall victim to much worse than a dust storm or predatory banks.

Dreamland’s director Miles Joris-Peyrafitte and screenwriter Nicolaas Zwart know this to be true, but they also understand that Eugene wouldn’t see it that way—not at first. Therein lies the title, Dreamland, and this idea that this teen may be able to escape this dead-end place that drove his father away two decades earlier.

After all, he’s always wondered what it would be like to travel to Mexico and look for that man on the Gulf Coast. So destiny appears to be shining on him when he finds Allison (Robbie) holed-up in the family barn with a gunshot wound asking for help in heading south of the border. And if he can also collect the reward, that would be gravy on top that he can mail back home after escaping.

That’s Eugene’s dream anyway. Or, at least what his sister Phoebe believes it to be. Because despite Eugene being the ostensible lead – this isn’t actually his story. It’s hers. As narrated by Phoebe (Lola Kirke), she recounts her own version of those indelible weeks that changed her family forever. She’s giving her half-brother the benefit of the doubt with some of these details, and perhaps, adding a layer of romance that might not have been there to help swallow the pill of a harsh reality yet to come. For instance, she imagines that Allison recruits Eugene by telling him what he needs to hear: she’s not a killer; she robs banks to avenge her own foreclosure; and she’s all alone.

The liberties Phoebe takes are both authentic and idyllic. She gives her brother the comic-book treatment with complex emotions, uncertain motivations, and potential love that moves beyond the violence, deceit, and stakes of what it truly means to be an outlaw. Dreams never quite come true the way you imagine them, and this is no exception. To choose this life isn’t without its sacrifices.

Cole embodies that role very well, shifting between teenage innocence and an unyielding desire to be seen as a man. His character can talk himself out of some jams, and wonders if he could even find personal salvation without hurting anyone in the process. But Allison isn’t some runaway to protect. She’s a criminal. Whether or not she pulled the trigger, she’s been accused of gunning down a young girl the same age of Phoebe during a shootout. Eugene isn’t thinking about the ensuing collateral damage. He’s infatuated by her occupation and her beauty regardless of whether he’s aware that she’ll do whatever is necessary to stay out of the sheriff’s crosshairs.

For her part, Robbie is a standout supporting player who wrestles with the truths of her character and the fantasies she concocts in order to avoid them. The role isn’t as big as you might expect, but Robbie’s character isn’t just a throwaway piece of Eugene’s unraveling. She is her own person with palpable fears, regrets, and room to be more than an opportunistic, cold schemer. And even though this complexity may be a narrator’s liberty to absolve Eugene of what happens, it feels real precisely because Phoebe (as the filmmakers’ stand-in) renders it as such. So we also care about Allison’s fate with and without him.

Those stakes are essential even as this ends up being a rather familiar take on a type of story we’ve seen many times. It helps that the cinematography and production design are all top-notch because we’re able to believe this environment is so lived-in, but Dreamland doesn’t rise to the level of outlaw stories like Ain’t Them Bodies Saints.

It is an attractive deviation that perhaps skews younger with its coming-of-age nostalgia overtaking the plot’s dramatic intrigue. It’s why Joris-Peyrafitte and Zwart can push Eugene and Allison so hard, so fast at the end. Because rather than need time to unpack the duo’s impulsive acts; they just need youthful passion to move past the pain.