Die in a Gunfight Review: A Fast-Paced Ride With Little Substance 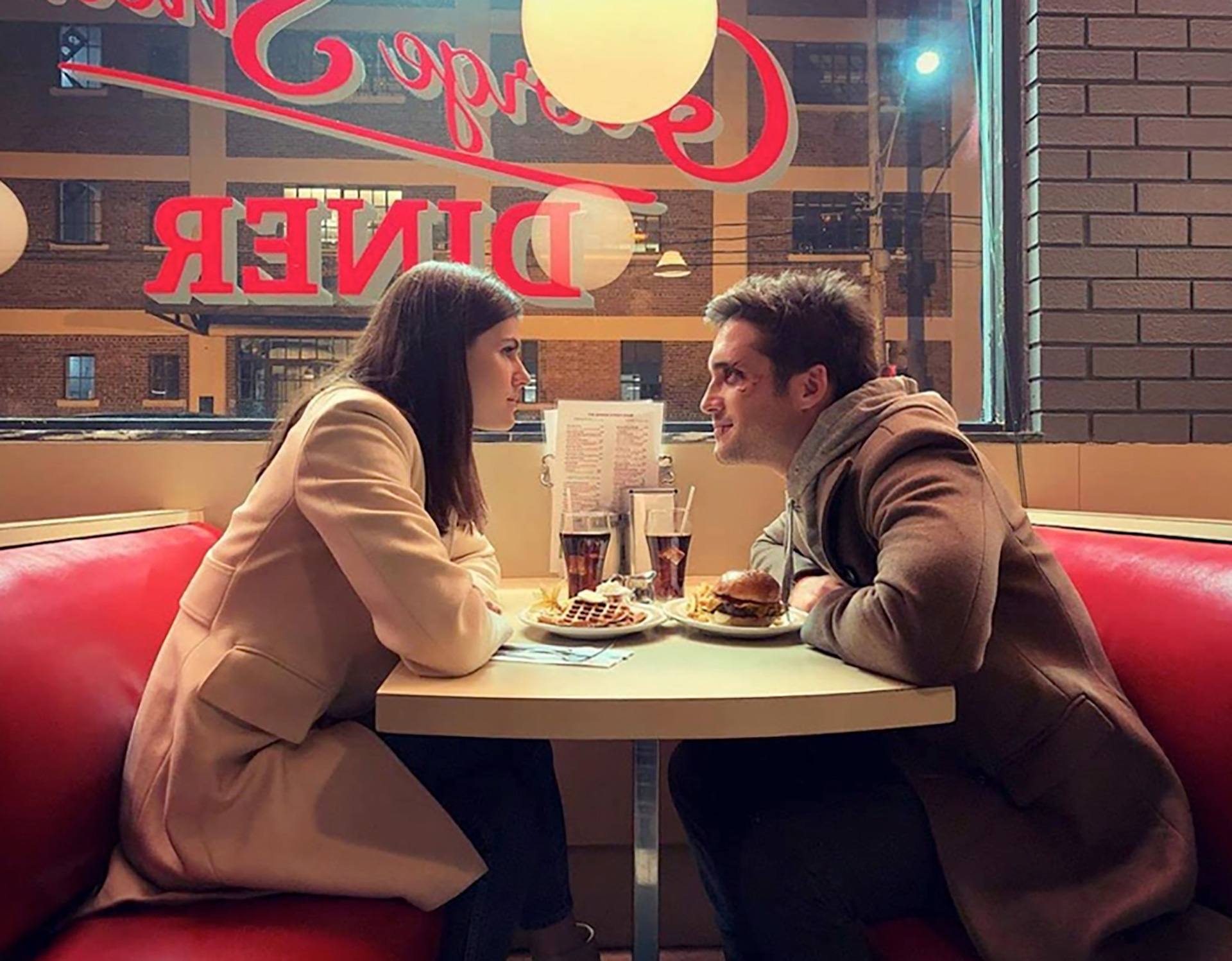 From the 2010 edition of the Blacklist to Zac Efron’s schedule, Andrew Barrer and Gabriel Ferrari’s screenplay for Die in a Gunfight seemed to be getting the fast-track into theaters before seven years of development saw a revolving door of actors and directors changing. It would take almost a decade before cameras started rolling and the person sitting prettiest after the whole ordeal became Collin Schiffli. After two indie films written by frequent collaborator David Dastmalchian, he’s finally got his hands in the Hollywood pie with Lionsgate and a modestly star-studded cast of B-listers to help make his stylistic flourishes look good. And there are a lot of them. Whether or not they work to make this riff on “Romeo and Juliet” a success is beside the point.

We’re talking animated interludes. A third person narrator (Billy Crudup). Viewfinder slides. Film rewinds that either go nowhere or branch off towards alternate realities proving the original outcome as fantasy. And an embellished hyper-reality that strives to reach the singular sensation that was Baz Luhrmann’s adaptation without quite getting there. This movie could become Schiffli’s director’s reel as he’s experimenting with aesthetics, pacing, and whatever else he can both out of a desire to create (I’m assuming as much) and necessity. The latter isn’t me being snarky or unfair either as the script’s plot could barely fill thirty minutes without it. There’s so little happening that the opening twenty minutes is nothing but a quirky, convoluted catch-up as to why our supposed star-crossed lovers are depressed beyond measure.

Here’s the recap: the Gibbons and Rathcarts are archnemeses in the world of media conglomerates. They’re ostensibly George Saros and Rupert Murdoch with Nancy Gibbon (Nicola Correia-Damude) joking that her son Ben (Diego Boneta) is a Democrat and William Rathcart (John Ralston) about to be destroyed in court by a whistleblower proving the only in-roads as to which is which (not that it matters). Henry Gibbon (Stuart Hughes) and William despise each other in that way that only rich white men can—snide side-eyes in public to keep up appearances where their “ideals” are concerned despite their wealth reinforcing how America’s political spectrum is and always will be a circle whose extremes meet for a game of squash. Ben and Mary Rathcart (Alexandra Daddario), however, are undeniable soulmates.

They planned to run away as teens. Parents intervened to make them think they ditched each other and moved on before eventually longing for what could have been. Ben was never one to hide his emotions, so he goes out each day picking fights in the hopes of feeling something (even if that something is a bruise or cut to cover the last fifteen in varying states of repair). Mary has always toed the line to keep the peace—screaming inwardly as her stoic appearance satisfies her oppressive father’s need to always know where she is and what she’s doing. The result: Ben acquires his Mercutio in BFF Mukul (Wade Allain-Marcus) to watch his back and Mary becomes saddled with a Tybalt/Paris hybrid in bodyguard/stalker Terrance (Justin Chatwin).

The movie then asks, “Will they end happily ever after?” It’s easier said than done, but also easier than you’d think considering there’s still an hour left and a couple wildcards in Wayne (Travis Fimmel) and Barbie (Emmanuelle Chriqui). Each sequence goes much longer than necessary while Schiffli does his best to stretch our attention spans via kinetic cuts, entertaining performances (Fimmel unsurprisingly steals the show with Chatwin trying to channel Jason Schwartzman from Scott Pilgrim despite not being able to match the effortlessly smug smarminess needed to achieve his transcendence), and a hyperbolically hokey undercurrent of pure, unadulterated love making waves beneath the gangster machinations of suits biting off way more than they can chew. It’s objectively hollow to its core and yet endearing just the same.

How can Fimmel stopping mid-beatdown to smile at a classic Hollywood romance or reveal his and Barbie’s matching heart tattoos not be endearing? It’s strange, meant to distract, and fleeting like so much of what’s been put on-screen, but you do find yourself pulling for these characters to find their way out of fate’s cruel game. Because it is all a matter of coincidence at the end of the day. Figures you don’t know are introduced briefly with words like, “They don’t tell anyone the details,” or revisited as crucial cogs in a different part of the story despite entering the fray randomly somewhere else. The hope is obviously that we won’t look too hard beneath the superficiality of everything, but the lack of plot ultimately wins out.

Your enjoyment is thus hinged on your ability to not care. Can you let the wild insanity be enough? I generally can and did for a large portion of Die in a Gunfight, but that still doesn’t make it more than a shallow lark to forget the minute you leave the theater. Boneta and Daddario are cute, Fimmel and Allain-Marcus and fun, and Chatwin is memorable even if it’s because he was miscast. The whole is fast-paced despite its numerous exposition-heavy lulls and the production value and energy is nice to look at, but at a certain point the realization that the flash is the point leaves you wanting more. So, kudos to all involved for keeping me entertained. Hopefully next time that entertainment comes with some substance too.

Die in a Gunfight opens limited theaters and VOD on July 16.