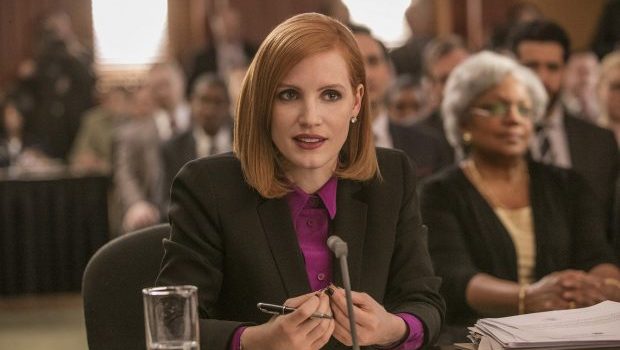 Despite a deliciously evil supporting turn in Crimson Peak and being an integral part of the large ensemble of The Martian, it’s been some time since we’ve Jessica Chastain in a lead role. Thankfully, that’ll arrive this fall as she stars in Miss Sloane, a new drama from John Madden, reteaming with the actress after The Debt, which follows her as a lobbyist in D.C. who is attempting to get a background-check bill through the U.S. Senate as she fights for gun control.

“Spotlight is a reference,” Madden tells EW, who debuted the first image, seen above. “Our film is about the pursuit of a goal and the pressures that are brought to bear, and it’s properly thrilling in ways you don’t expect. And it pays very close attention to the people who work in this world.” Chastain adds, “Gun control is divisive because some people are immediately afraid that it’s a kind of confiscation. And people who hear that in regards to this film will think it’s a plant to move them in one direction.” She adds, “It’s not.”

Check out another image, courtesy of EuropaCorp, and the synopsis below.

MISS SLOANE is the story a ruthless lobbyist (Jessica Chastain) who is notorious for her unparalleled talent and her desire to win at all costs, even when it puts her own career at risk. The thriller pulls back the curtain on how Capitol Hill games are played and won as Sloane faces off against the most influential powers in D.C.