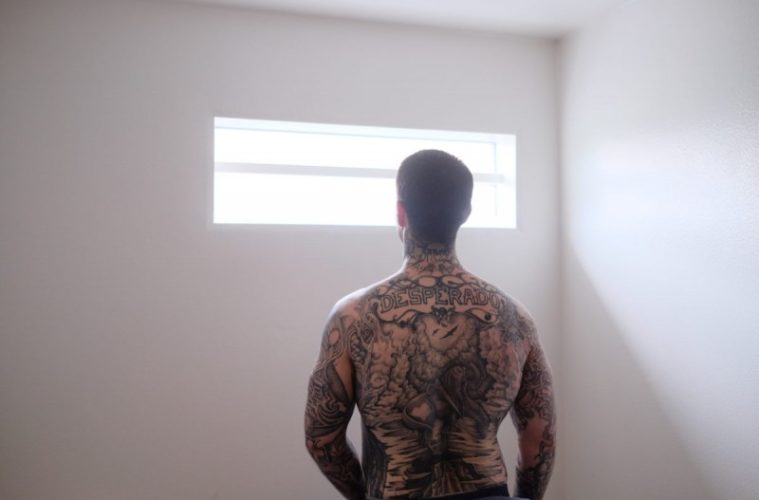 DOC NYC Review: ’16 Bars’ is a Heartbreaking Story of a Path Not Taken

Set in a unique program behind the walls in the city jail of Richmond, VA, 16 Bars is an electrifying and heartbreaking story of what might have been if some offenders had chosen a different path. Arriving from all walks of life–from decent upbringings to abject poverty and homelessness–the men sign up for a series of programs on the jail’s sixth floor pod which include anger management training, classes, and access to a makeshift recording studio under the tutelage of hip-hop legend Speech (aka Todd Thomas) from the band Arrested Development.

Working across genres from hip-hop to country, director Samuel Bathrick focuses primarily on the journey of Speech along with a group of offenders awaiting trial or release: De’vonte, Anthony, Garland, and Teddy. The jail’s dedicated program manager Sarah–whose commitment extends beyond the white and blue concrete walls of the modern jail–plays the role of disciplinarian and guidance counselor, telling Anthony to turn the other cheek when the jail’s custody staff singles him out for insubordination.

Although not as transformational as the program documented in Jairus McLeary and Gethin Aldous’ The Work or Ben Lear’s They Call Us Monsters, the program is unique in that Richmond is intervening and providing services to men that may later have their charges dropped. This isn’t a prison, but rather a liminal state and the men make the most of this, crafting heartbreaking riffs on street life, the drug epidemic, and feeling as if having free time offers opportunities to get in trouble rather than opportunities for successful living. Living this hell is Garland, a handsome culinary school graduate who could never manage to clean us his act, turning to property crime to fund his drug habit. Speech theorizes what might have been possible–he has the look and sound of a bonified country star that’s dream will be deferred.

16 Bars is a successfully engaging documentary full of great musical performances as Speech mixes and finishes these oral histories into an album that in part will benefit these men in their journey upon reentry. The film proposes no solution to these issues other than the lyrics which begs the question: would more arts programs and mentors like Speech make the difference in communities hit the hardest?

Documenting the excellent work of these musicians and poetic talents under the direction of Speech, the film sidesteps self-congratulatory passages about how this work has changed Speech, save for its coda as he puts the glorious finishing touches on a track by Teddy, who, like others, proves he’s capable of greatness when pushed. While aesthetically 16 Bars breaks no new ground in the outsider working with inmates genre of documentary, it offers a collection of heartbreaking stories and, to its credit, refuses to provide easy answers.

16 Bars has its NYC premiere on November 15 at DOC NYC.