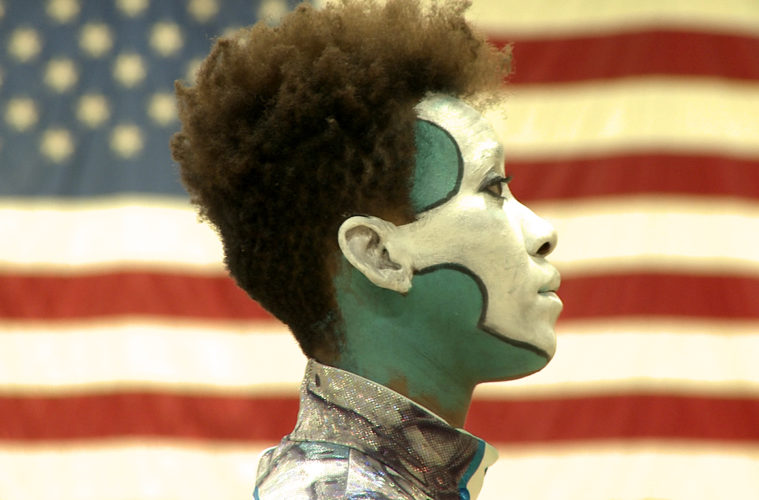 Heads up: one of this year’s most exciting films, Contemporary Color, begins rolling out very soon. A concert movie that looks and moves like nearly no other — a spectacle often more along the lines of Metropolis or Koyaanisqatsi than Stop Making Sense — it nevertheless brings to mind the Jonathan Demme classic for, if no other reason, the involvement of David Byrne, who launched a nationwide performance series that mingles high-school color-guard teams with best-selling recording artists (St. Vincent, tUnE-yArDs, Nelly Furtado, and Byrne himself). Brothers Bill Ross IV and Turner Ross‘ documentary captures the efforts of both, resulting in a deeply sympathetic story of creative expression.

So I said in my review from last year’s Tribeca Film Festival, where I added, “[They’ve] created an experience that captures (and may even supersede) the fertile ground upon which it’s been built. In its formal inventiveness and compassion, Contemporary Color moves well past the boundaries of ‘concert movie.’ Not that those seeking as much would likely come away unsatisfied.”

In the summer of 2015, legendary musician David Byrne staged an event at Brooklyn’s Barclays Center to celebrate the creativity of Color Guard: synchronized dance routines involving flags, rifles, and sabers, colloquially known as “the sport of the arts.” Byrne recruited performers including the likes of St. Vincent, Nelly Furtado, Devonté Hynes, Zola Jesus, Ad-Rock, tUnE-yArDs, and Ira Glass to collaborate on original pieces with 10 color guard teams from across the US and Canada. The result is CONTEMPORARY COLOR, a bold and irrepressible snapshot of a one-of-a-kind live performance.

Contemporary Color begins its theatrical run on March 1 and expands in the following weeks.