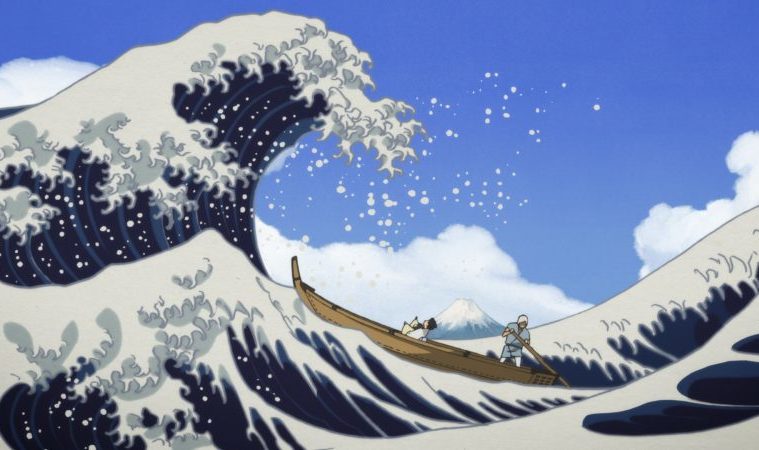 Recently picked up by GKIDS for a release here, a U.S. trailer has arrived for Miss Hokusai, the latest feature from Keiichi Hara, which chronicles the life and work of Katsushika Hokusai, an artist and ukiyo-e painter, through the eyes of his daughter, Katsushika O-Ei.

Toying with scales of massive ground drawings and tiny stone sketchings, the trailer nicely parallels the work of a giant’s art (the father) with that of someone living in their shadow, and trying to create art of their own (the daughter). Still, it is not with jealousy or anger that the daughter creates, instead paying tribute to her father as much as she pushes for her own standing in the artistic world.

As the daughter beautifully sums up, “with two brushes and four chopsticks, we’ll get by anywhere.” See a poster and the trailer below, with a tip of the hat to Screen Anarchy.

As all of Edo flocks to see the work of the revered painter Hokusai, his daughter O-Ei toils diligently inside his studio. Her masterful portraits, dragons and erotic sketches – sold under the name of her father – are coveted by upper crust Lords and journeyman print makers alike. Shy and reserved in public, in the studio O-Ei is as brash and uninhibited as her father, smoking a pipe while sketching drawings that would make contemporary Japanese ladies blush. But despite this fiercely independent spirit, O-Ei struggles under the domineering influence of her father and is ridiculed for lacking the life experience that she is attempting to portray in her art. Miss Hokusai‘s bustling Edo (present day Tokyo) is filled with yokai spirits, dragons, and conniving tradesmen, while O-Ei’s relationships with her demanding father and blind younger sister provide a powerful emotional underpinning to this sumptuously-animated coming-of-age tale. Miss Hokusai opens in the U.S. on October 14th.