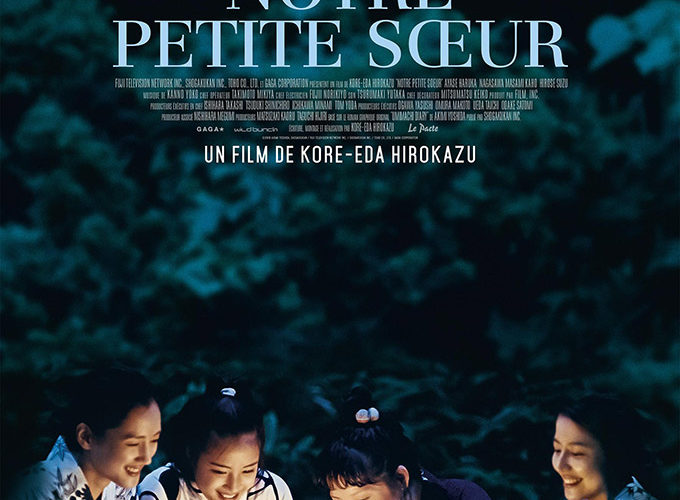 Those who fault Hirokazu Kore-eda for retracing largely similar territory with each consecutive film will find their criticism corroborated by Our Little Sister, the Japanese director’s follow-up to his 2013 Jury Prize winner Like Father, Like Son. Adapted from Akimi Yoshida’s highly successful manga Umimachi Diary, Our Little Sister is once again an examination of the dynamics amongst the members of a damaged family. In attempting to tackle four protagonists, however, Kore-eda seems to have bitten off more than he can chew, delivering an uneven and ultimately superficial story of emotional maturation.

Sachi (Haruka Ayase), Yoshino (Masami Nagasawa) and Chika (Kaho) Koda are three sisters living together in a large, old wooden house in the picturesque coastal town of Kamakura. Sachi, who is around 30 years old, is the eldest and the contrast between her serious disposition and her sisters’ more carefree, youthful personalities – Yoshino, fond of drinking and boys, is in her early twenties, and the bubbly Chika is in her late teens – immediately establishes her as the household’s surrogate mother. After receiving an invitation to their father’s funeral, the sisters travel to the rural village where their father has been living with his new family, meeting their 14-year-old half sister Suzu (Suzu Hirose) for the first time. On a whim, Sachi invites Suzu to live with them in Kamakura and the latter readily accepts, initiating the characters’ very gradual confrontation with their family’s past.

In its first act, the film exhibits Kore-eda’s trademark delicacy, introducing the characters and their family’s backstory through an engagingly understated and elliptical approach. At the outset, the girls seem like orphans who have inherited their parents’ house and the funeral invitation comes as a surprise, as does their reaction: Sachi feigns nonchalance, initially claiming she won’t attend because of work commitments, whereas her sisters genuinely seem to relate to their father as a stranger, accepting the invitation primarily out of politeness and curiosity. Their mother remains unmentioned. Slowly, the fragments start to coalesce, and it transpires that the father had an affair and left the family, presumably once his mistress became pregnant with Suzu, while the mother abandoned her children, forcing the near-adult Sachi to fill the parents’ shoes and breeding long-term resentment.

The organic manner in which the script pieces these details together, establishing the characters’ emotions prior to revealing their underlying reasons, paints an effective and nuanced portrait. Disappointingly, this tact is progressively lost, eventually reaching the opposite extreme. As the narrative approaches its end, the film resorts to spelling out its resolution, lest any of the themes were to be lost on the viewer. For instance, though the parallel between Sachi’s film-long affair with a married man and her father’s affair is evident from the start, it’s underlined through on-the-nose reprimand from not just one, but two of her sisters.

It doesn’t help that the resolution itself is rather hackneyed. Through their experiences, the sisters come to realise that all families have their troubles (every other character has familial troubles analogous to the Koda’s) and that imperfection is an integral part of being human, though one that can be compensated through mutual forgiveness and understanding.

Had the story been more focused rather than trying to encompass all four sisters as protagonists as well as integrate a number of redundant secondary characters, it likely could have yielded more satisfying results. Instead, Yoshino and Chika are left wholly underdeveloped (the latter is essentially a nonentity with a perpetual smile), and although Sachi and Suzu receive considerably more attention, none of the sisters manage to emerge as fully rounded characters, necessitating the broad strokes in the conclusion. This inadequacy is reflected in the cinematography’s repeated insistence on framing all four sisters together in tableaux of unity. Despite the images’ careful and often gorgeous compositions, in these moments, the sisters’ grouped positioning results awkward and forced.

Our Little Sister premiered at Cannes Film Festival and opens on July 8, 2016. See our complete coverage below.