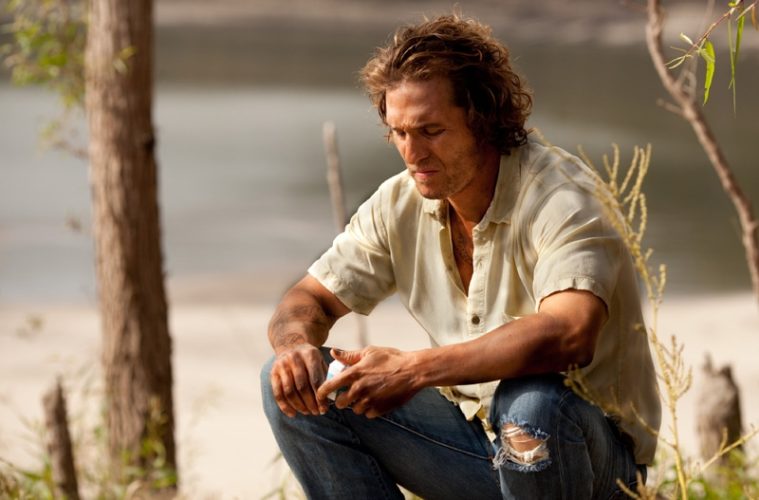 Still exploring the working class American south with a heavy dose of mythical storytelling, only this time with a much broader brush, Jeff Nichols‘ tries at many different things in his entertaining, if overlong, film Mud. Matthew McConaughey (here at Cannes with two films this year, the other The Paperboy) stars as the titular character, who’s discovered on a small island in the middle of the Mississippi River by two 14-year old boys, Ellis (Tye Sheridan) and Neckbone (Jacob Lofland). Mud, sporting a chipped front tooth and greasy, unclean hair, has been living in a boat stuck up in a tree, waiting for his girlfriend Juniper (Reese Witherspoon) to come calling. Ellis is immediately smitten by this mysterious adventurer, who spends the majority of his time spinning tall tales and offering up advice he clearly thinks is sage. McConaughey has, without a doubt, chosen to start taking some risks again as an actor and they are welcome here. He fits into the shoes of this strange, modern legend nicely as Nichols’ script becomes more and more big and loud and ridiculous. The filmmaker’s been building to this kind of grand, home-cooked fairy tale throughout his short career, which may explain why he is doggedly loyal to every single character and subplot that is introduced.

Too many of each, in point of fact. The more we discover about Mud, the more problems begin to set in for the two young boys, Ellis in particular. Sheridan serves as the lead of the film and does well in the position. The young actor’s got a naturalism about him that is hard to teach, expanding on what he gave us in The Tree of Life last year. Nichols, not surprisingly, creates a vivid world around Sheridan’s Ellis, full of wonderful 35mm cinematography of the Mississippi as well as select magic hour photography that serves to separate one scene from the next.

Where Nichols falters is in deciding how grounded he wants the film to be. In Take Shelter, most of the magic realism and ominous imagery was internalized in its hero (Michael Shannon, who makes a small but welcome appearance here). Though we are told the story from Ellis’ point of view, that same internalization is not present. The world of Mud is a mystical one, where snake bites and bad men lurk around the corner, waiting to strike. In meshing this type of story with the experienced, lived-in narrative he built his name on, Nichols struggles to find a balance, resulting in a climax that is better served in a studio action-thriller. Not that this hyperbolic finale isn’t alluded to. The foreshadowing peppered throughout Nichols’ screenplay is laid on so thick it gets hard to keep track of all the expectations the narrative sets up for itself. And if one does, in fact, keep track, it’s clear the film doesn’t quite follow through on all of them. Witherspoon is all but wasted in what is promised to be a pivotal role. Her screen time is limited and her contribution, considering she’s the catalyst for the film’s central conflict, is surprisingly lacking.

Imperfect as it may be, this marks a step forward for Nichols as a filmmaker capable of making big entertainment that retains some intelligence and a palpable message as well. Let’s call Mud what it is: a test run for what will undoubtedly be a bigger, better follow-up.