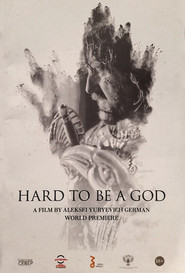 [Cannes Review] Hard to Be a God

“The artist is a canary in a mine shaft. If Brezhnev had read Rudyard Kipling, he would never have gone into Afghanistan.” Director Aleksei German said this to J. Hoberman in 1998, during the festival run of his widely panned Khrustalyov, My Car!, a bracingly dark comic odyssey into the corroded soul of Stalinist Russia. It was only a few years later that German began work on a long-gestating project he’d wanted to produce since the late ’60s: the adaptation of a novel by Arkady and Boris Strugatsky, perhaps best-known in the United States for The Roadside Picnic, which was itself transformed into Andrei Tarkovsky’s Stalker. This novel, Hard to Be a God, is the story of scientists who attempted to transform a distant planet called Arkanar from the Medieval Ages to the Renaissance, but instead created anarchy. It seemed like the perfect epic for German’s massive ambitions — but the film took years to get funding, even longer to shoot, and an eternity to edit. And, then, in February of 2013, German passed away. Nonetheless, this final film was finished in the editing room by his wife and son — Aleksei German Jr., a great director in his own right — and quietly opened at the Rome Film Festival last year. (The film, in the case of this review, was played at the Cannes marketplace.) It is, without a doubt, a stunningly radical work: a three-hour journey into the heart of darkness that doesn’t just grab you, but envelops, haunted by a moral bleakness that leaves nothing beyond the images of terror it creates. While German remains simply a curiosity in the United States (he is as beloved as Tarkovsky in Russia), Hard to Be a God is the perfection of the director’s long-take approach, likely to remain unmatched for years to come.

The film takes place many years after the scientists have first traveled to Arkanar; their hope to modernize has instead turned the planet into an anti-intelligentsia haven — the university has been destroyed and most of the wise men have been hung — while a war between the grays and the blacks has broken out. Our supposed hero, Don Rumata — Leonid Yarmolnik, in a performance up there with the best of Klaus Kinski in its portrayal of madness — has all but given up in his quest for progress, choosing to live out the rest of his life as a demi-god bolstered by powerful armor and weaponry. Rumata is hailed by some as a hero while feared by many more; above all else, he remains indifferent to their attention. This is the land of blabbering looney tunes — idiots who seem unaware of life itself. They bash each other, run around in circles, and flog their bodies in every which way, as if rational movement is an impossibility. They even stare directly into the camera, as if looking at some futuristic device that appears to be recording the entire proceedings.

That type of odd camera gesture would seem out of place in most films, but part of the astonishment of Hard to Be a God is the 360-degree reality German has created — a Bruegel painting transmitted into cinema through the density of the physical world in every shot. These are not just long takes that are motivated by characters or following certain rhythms. They take on a sense akin to documentary war footage as the camera often comes in close contact with its subjects — swords, heads, and other objects suddenly shoving themselves into the foreground of the space with shocking force. The camera spins with intense fury, and, at every turn, there is something thrilling about viewing the world of Arkanar as a totality. This film never feels like it was shot on a set: the physical materials of the world (rain, fog, mud, blood, sweat) all feel authentic, with the scars on the faces and the genuine disgust of having to simply be part of this reality less a performative action than their real emotions transposed into the filmic work. Within this chaos, a world that Rumata cannot escape, he must essentially remain an ambivalent figure. In a world that seems bent on crushing any sense of power and letting anarchy be the law of the land, Rumata oscillates in the madness he slowly takes in. He is not a good man, nor he is beyond abusing his power — he forces one man to repeat, over and over, “Fish like milk,” the film’s version of Orwell’s “2+2=5.” Instead of fighting the war, he severs ears (a count up to over 300!), abusing the indifference. But his mind seems to be eroding as well.

What does it all mean? Ingesting God in a single viewing can be overwhelming. The sequences all blend together into a single exhausting totality, until the film’s climatic half-hour as Rumata embraces the beast inside during a sequence, where the physical action dissolves into one of almost-metaphysical proportions. The Strugatsky brothers’ novel was clearly a product of the Soviet Union, but German has made something post-Soviet in its outlook — not one that sees hope in the era which followed the Wall, but only a parade of new idiots, a regression ever further into the madness of false democracy. And, as the current state of Eastern Europe drives further into chaos, perhaps Hard to Be a God is the film of our times. It’s undoubtedly one that demands our attention.

Hard to Be a God screened at Cannes Film Festival and is currently without a U.S. distributor.