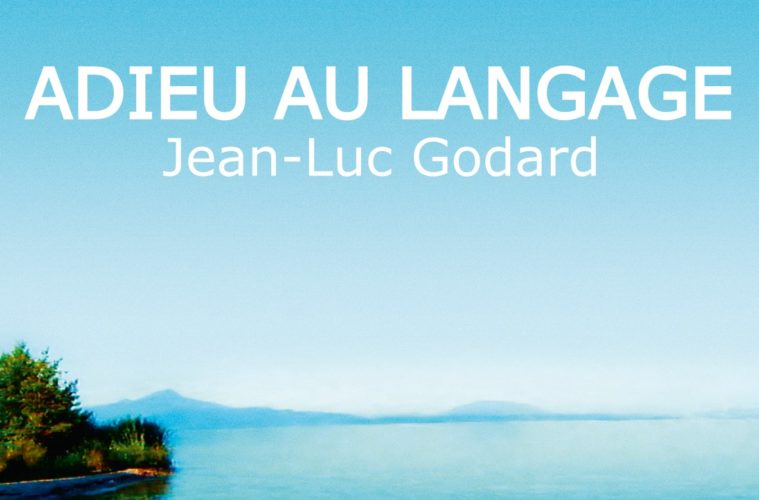 Goodbye to Language, an essay work by Jean-Luc Godard, is not the kind of thing one can simply write about without weeks or months of contemplation. The head is filled with thoughts, so I offer them in the same manner they swirl around.

A symphonic release. The violins swirl up the chords. The text tells us, “When imagination has failed, one must take refuge in reality.” So must we. But what has come of reality? The world of nature, but what about the manufacturing of war? Cinema: the images were the murderer of ideas in the 20th century. A reclamation of reality is in order. A reclamation of freedom. Jean Arthur stares out at Cary Grant. She takes a chance on the unknown. So must we.

Yes, this is Godard. This is Late Godard. Beyond Late Godard. Historie(s) investigated the past. Socialisme: the present. And now: the future. It is Cinema 3.0 — 3D.0. We’ve passed the movement-image, the time-image, and into the image-image: the Frankenstein of the 21st century.

The film is called Adieu au langage. Goodbye to Language. Why language? The goodbye is to cinematic language. The idea of cinema as a translator, as communication. Instead, the images are removed from their language. They are reality. 3D reality. A book; a table; a tree; a phone. They pop — the colors bleed into saturation. The new cinema. Representation disappears. The iPhone cinema. Arnheim and Bazin stood at polar opposites. Godard has found a way to wield them together. Total cinema as pure reality — the wind in the trees, but nothing to limit them as simply the staging of reality. Not a manifestation of reality. Reality as reality.

Why the necessity to say goodbye? The state. It is always the state — the limitation of freedom. The invention of television boxed it in, the same year Hitler came to power. (With Godard, one can never escape Hitler.) The new ideas: do they exist? They require the language. They aren’t new ideas without freedom. They are metaphors. Like Dietrich: always a metaphor, never reality. Kamera, in Russian, means prison. The movie kamera was only a metaphor.

But cinema is not a metaphor. The 3D flip camera. It can spin in any direction; it can pop reality. Zoom. It can float in and out of the world. 3D does not limit; it expands reality.The gaze can reach a totality. In one moment, 3D creates not one image, but two. How to see the image at once when it is two images. Look left, look right. Close one eye. Close the other. Gaze toward the center and the eyes pop. Finally, they return to one. But how to escape the gaze? The male gaze, the female gaze. The nude bodies. They gaze and are gazed upon. Instead, the dog. Roxy! How cute! But not just cute. It is the animal gaze. The gaze of a gaze reflected back. The dog runs through nature. It rolls and twists and turns. It is not a performance. It becomes one with reality. The images through the dog. The images of the dog. A communion of the two, perhaps. Animal and man. Man and animal. No metaphor. Reality. Cinema. Reality.

The man; the woman. Nude bodies. She speaks of equality. He shits on it. Literally. The shower drains blood — the blood of blood oranges. Will they find peace? Not with each other. Not with language or metaphor. Their images are blurred, too. Ugly, perhaps, as distorted as the television screen aside them. Trapped in Cinema 1.0 or 2.0. Image as metaphor.

The colors of cinema: washed-out, bleeding, all too much. A view of nature — distorted, but accurate. Without metaphor. The trees, the wind, the fishes, the birds, the flowers. All viewed by the dog.

They cannot breed a child. It would be just another child. Instead, she says, a dog. Roxy. The new cinema. The dog looks out onto the horizon. The image fades, and the screams of a child being born. The thoughts of dozens of philosophers thanked in its creation. Language is gone. The new cinema has arrived.

Goodbye to Language premiered at Cannes Film Festival and is to be given domestic release by 20th Century Fox. See the trailer here.