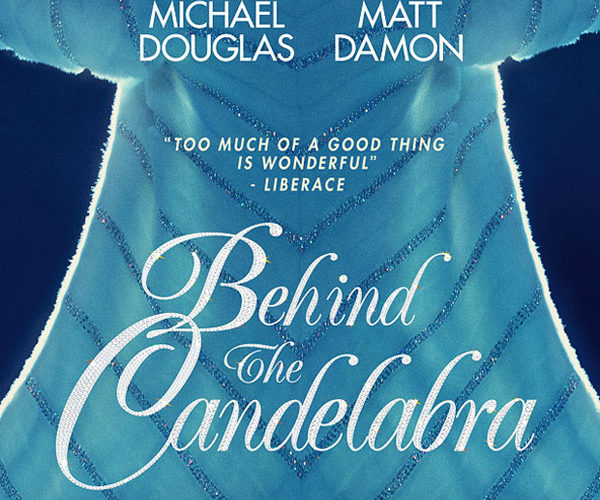 [Cannes Review] Behind the Candelabra

“Too much of a good thing is wonderful.” So says Liberace in what might be Steven Soderbergh‘s final feature film, Behind the Candelabra. A biopic about the flamboyant Las Vegas performer whose virtuoso piano skills and over the top extravagance made him a household name, the film dives into his personal relationship with a young animal trainer from Hollywood. Starring Michael Douglas as the lavish larger-than-life singer, constantly adorned in sparkling crystals outfits, and Matt Damon as Scott Thorson, the innocent young man who suddenly finds himself a boy toy, the central focus is on the couple’s burgeoning relationship and how it deteriorates throughout the years. Surprisingly less tame than one might imagine, Behind the Candlelabra is, also, unexpectedly standard fare when it comes to profiling a personality as grandiose as its central subject. The film opens with a young, naive Thorson, working his day job of training dogs for movies when he encounters Bob Black (charmingly played by Scott Bakula) at a gay bar. Black and Thorson develop a close rapport and decide to take a weekend getaway to Las Vegas, whereat he introduces Thorson to his close friend, Lee, better known to the world as Liberace. Immediately overcome by his dazzling persona during a performance, Thorson finds himself mesmerized by his stage persona, lavish lifestyle, and gentle personality. Lee is also equally enamored with Thorson — who he lovingly refers to as “Adonis” — and wants him to be part of his life. The two quickly develop a relationship, prompting Lee to invite Thorson to live with him as his personal assistant, soon after prompting him to become accustomed to a lifestyle of excess. But, like all relationships, the initial excitement gradually fades, leading Thorson to become infatuated with his elder lover as he becomes disinterested.

Part of the appeal to Behind the Candelabra is seeing Damon and Douglas’ chemistry as lovers — how their relationship evolves over time. Both do an admirable job, with Douglas’ quirky mannerisms taking center stage in every scene that features his presence. Damon’s cool-headed naïveté quickly gives way to a Boogie Nights-esque, drug-induced breakdown as he starts becoming addicted to cocaine and pain pills. There are some other great supporting roles in the form of Lee’s manager (played with stern determination by Dan Aykroyd) and scene-stealer Rob Lowe, who offers some of the funniest moments in the film as a drugged-up plastic surgeon. And, yet, despite these great performances and interesting subject matter, there’s a sense of familiarity that Candelabra can’t entirely escape from. Perhaps this is due to the restrained direction from Soderbergh, but something feels missing throughout the film. It might all come down to the filmmaker feeling more concerned with Liberace’s almost vampiric search for endless youth than, in a more human manner, what makes him tick and why this obsession ultimately consumed him. Featuring the signature “cinematic” style one comes to expect from a Soderbergh film, it would have been perhaps more interesting to push the stylistic boundaries further for such an interesting subject matter rather than take a timid approach. While Behind the Candelabra is sure to earn fans for as much, it’s in turn difficult to escape the feeling that Soderbergh could have left with a bigger bang if this, truly, is his last foray into feature filmmaking.

Behind the Candelabra premiered at the Cannes Film Festival and hits HBO on May 26 at 9 p.m.