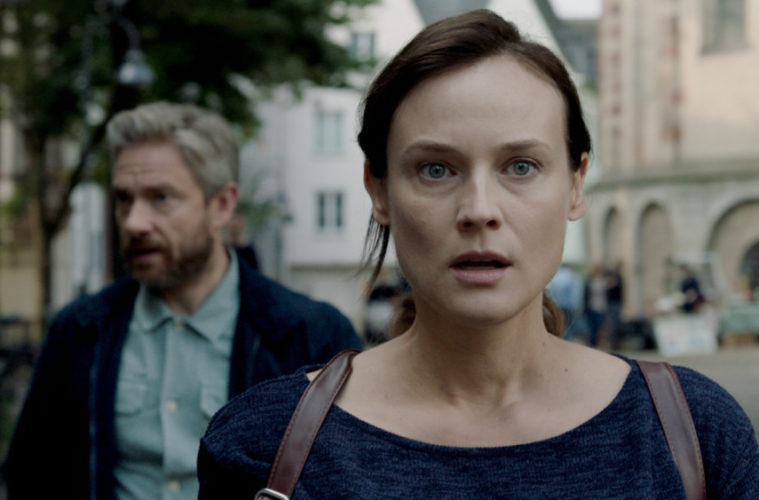 Where political shenanigans go, spy thrillers often follow. In Yuval Adler’s film, unspooling out of competition at the Berlinale, Iran’s recent nuclear weapons program– as alleged by Israel and the Trump administration, at least–provide a background to a John Le Carré-style potboiler of mysterious identities and industrial espionage that could have been ripped off the front pages.

Diane Kruger anchors the film as the titular Mossad agent (a title, incidentally, as uninspired as much of Adler’s directorial style), and crucially is very good at creating just the right level of enigma to a character with an mysterious past and murky personal priorities. She plays Rachel–which, it turns out, is not her real name–hired undercover as a language teacher to infiltrate an electronics company in Tehran tied to Iran’s nuclear regime.

Curiously though, Rachel is not in fact Israeli; she’s a Westerner who has lived in half a dozen countries, landing on Mossad’s radar with her language skills and affectation for Israel after a relationship with an Israeli went sour. “I’m jealous of people who have a place,” she says to her Mossad handler, Thomas, a British Jew and fellow nomad played by Martin Freeman. His straight-man role–Freeman is very much in autopilot mode here–proves one side of a triangle with her Iranian asset and soon-to-be lover Farhad (Cas Anvar), a playboy and man about town who introduces her to a Tehran far from the Israeli (and indeed American) propaganda. Just as she continually lies to protect her secret identity, she experiences an Iran where everyone has secrets. Underground parties, alcohol, and drug taking are all de-facto sanctioned–if you learn to keep these indiscretions under wraps.

The film is based on a book by Mossad agent turned novelist Yiftach Reicher Atir, which ought to give this story a gilt of realism, but there is a central implausibility at the center. Neither Kruger’s nor Freeman’s character speak Hebrew, which you’d think would be a pre-requisite for working in the Israeli secret service. This plot point might help the film sell to English-language audiences, but it’s revealing of a lack of caution in a film so on the surface rigidly unembellished in its approach to be almost flat.

Director Adler has made a very talky film, full of interior scenes and far flung from the hard-edged spy thrillers of Bond or Bourne. There’s little of the political messaging you might expect, too, of a film that signals itself as a contemporary portrait of an arms race in the Middle East. Instead, if anything, it’s about a woman forced to extreme measures in a world in which men easily take advantage. Kruger is good as a woman on the edge, and has been here before, on the brink of losing it in In the Fade, which won her Best Actress at Cannes. But as the film crawls towards its conclusion, there’s not much of a sense of righteous anger in Rachel at her Israeli masters after she believes she’s been used. Audiences will rightly feel they have been used too.

The Operative premiered at the Berlin International Film Festival.