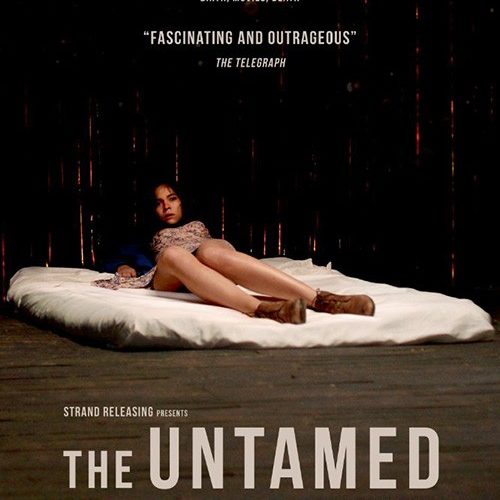 There’s something dark and wonderful lurking in The Untamed, the brilliant, frightening, hyper-real erotic mystery from the mind of Mexican auteur Amat Escalante, whose Heli ruffled more than a few feathers in Cannes a few years back. Is the 37-year-old merely a provocateur? On the evidence of his latest film, he is clearly not. The plotline of a strange extraterrestrial being that lurks in the woods granting ultimate pleasure sounds like a schlocky drive-in science fiction flick, but the director heightens things immeasurably by expertly cultivating the visceral, aesthetic nowhere of a drug trip, as if the characters involved (and perhaps the viewer) are participating in some sort of communal high. Escalante opens on disjointed imagery: a comet; a woman masturbating (or not?), then she’s running through the mist, wounded, towards her dirt bike. Then, just as quick as it started, the dream — or whatever it is — stops. We’re in bright and colorful Guanajuato, but shot like another disjointed reality. We meet a similar, yet somehow more innocent-looking woman in a doppelgänger trope that recalls both Hitchcock and Lynch. Ale (played by Simone Bucio) is the wife of a macho man named Angel (Jesús Meza) who happens to be cheating on her with her own brother. Escalante’s film, we immediately discover, is one with sex on the mind. Angel’s a self-loathing homosexual and a total dickhead; cinema-goers should be familiar with the type.

His lover is a nurse in the local hospital and it’s he who tends to the wounds of Veronica (Ruth Ramos), the woman we saw at the start. They form a friendship, causing Veronica and Ale to meet, but one day Ale’s brother is found dead in a creek after breaking up with Angel. Ale then finds Angel’s threatening messages on her brother’s phone and so reports him to the cops. We get accustomed to this hate crime narrative, but soon strange things begin to reappear in the plot. Escalante retains a sense of otherness even in these earlier scenes of relative normality. Working with screenwriter Gibrán Portela, Escalante’s dialogue has a poetically stilted quality that only adds to the film’s sense of disorientation, with the viewer constantly shifted between spaces of disjointed familiarity: a stack of ribs; a hospital; a Lynchian alleyway; and a dark forest. Lars von Trier’s recent cinematographer Manuel Alberto Claro shoots it all with necessary levels of gathering dread.

So what is lurking in this film’s forest? What draws these characters to it? A woman talks of a meteor falling, leaving a crater in the earth, a place where desires are realized. It’s a setup unmistakable from Andrei Tarkovsky’s Stalker — a black dog even seems to guide the characters’ movements — but there are no philosophical meanderings here, nor any rainy rooms or mysterious carp. Escalante’s “Zone” is instead one of Freudian sexual dreams — or perhaps nightmares, depending on the viewer. It’s a spiritual thing almost and, once addicted, the characters will risk their lives to go back.

The Untamed does that very rare thing in cinema in that it blends mystery, horror and pseudo-reality with a kind of dark subconscious arousal. In this way it recalls the auteur directors previously mentioned here, but also the eerie ethereal science fiction of H.P. Lovecraft. All this might lead you to believe that The Untamed is built on homage, and yet it refuses to be anything but its own thing. You won’t find any chickens copulating in Blue Velvet, for example, or skinny women riding on dirt bikes for that matter. The ending comes out of nowhere and might leave viewers rattled, but there is something in that radical imagery, and the illicit taboo nature of the characters’ actions, that will linger with the viewer long after.

The Untamed premiered at the 2016 Venice Film Festival and opens on July 21.