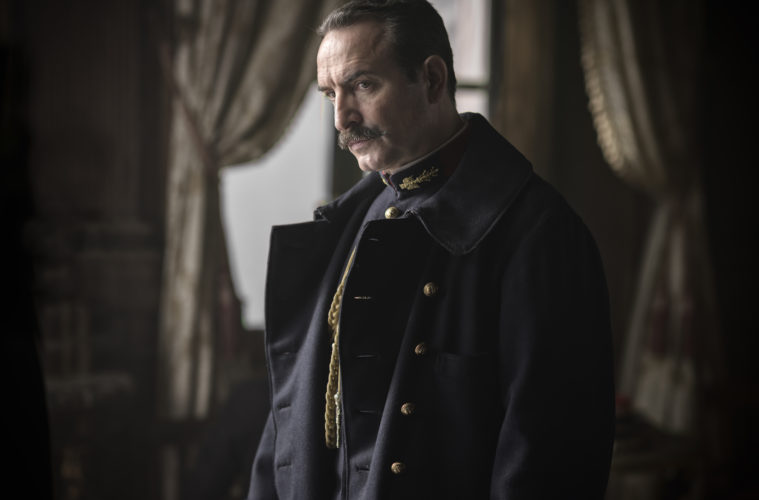 Venice Review: ‘An Officer and a Spy’ Finds Roman Polanski Telling a Tale of Injustice

What road should one take when approaching a film like An Officer and a Spy? On one hand, it is a perfectly robust, informative, prestige-y and even timely dramatization of the Dreyfus affair, the infamous late 19th-century political scandal in which a French Jewish soldier was wrongfully imprisoned for treason. On the other hand, it is a story about injustice and prosecution directed by, of all people, Roman Polanski.

So to that first hand: an especially dashing and mustachioed Jean Dujardin stars as George Picquart, the man responsible for pulling the thread from which the Dreyfus scandal ultimately unraveled. Polanski arranges the narrative in much the same way that Mike Leigh did with Peterloo, another film about 19th-century social injustice–and one in which the director carefully set out the names, dates, and people involved before going for the jugular in the final act. The first half of An Officer and a Spy is very much about that kind of table setting and viewers unfamiliar with the miniscule details of the events will find much to enjoy in the world Polanski has envisioned here, with all its old-world espionage and double-crosses.

It also can feel a little like homework at times. We enter proceedings just after Picquart has taken over as chief of the army’s primitive intelligence offices, the place where he will discover this tale’s smoking gun: a memorandum used to convict Dreyfus that was actually penned by a high ranking French officer. Polanski does not rush the point. Indeed, he rarely even leaves the dusty interiors of his world for much of the opening two-thirds, but he still has the ability to string an audience along in such circumstances and, regardless, his third act is a relative barnstormer–as claustrophobic back rooms give way to beautiful Parisian street scenes, lively courtroom drama, a handwriting expert played by a delicious Mathieu Amalric, and even a sword fight.

The film was originally titled J’Accuse, a reference to Émile Zola’s open letter in which the writer accused the French government of antisemitism. Zola appears in the film but the clear and timely resonance of his act–one of the most famous cases of a free press speaking truth to power–is oddly skimmed in service of the story’s juicier elements. Polanski adapted the screenplay with Robert Harris from Harris’ own semi-fictional book on the affair and the narrative unfolds as one would expect a page-turner might: all heroism, betrayal and systematic corruption (yes, this one goes all the way to the top). An Officer and a Spy was shot by Paweł Edelman, who brings the same grim, grandiose, wide-angle imagery that he supplied for Polanski’s last great thriller, The Ghost Writer. Dujardin wholeheartedly fulfills his old-school leading man duties here, looking handsome and duty-bound alongside fine performances from Emmanuelle Seigner (as his lover Pauline Monnier) and Louis Garrel (as poor old Dreyfus himself).

Then there is that other hand: An Officer and a Spy was selected to compete at the 2019 Venice film festival, a decision defended by Lucretia Martel, the head of the jury. The Zama director stated in her opening press conference that she would not necessarily congratulate the director if he won, but that the film would be treated exactly the same as any other. Her team went on to award it the Grand Jury prize (basically second place) in a ceremony that some believe to have been a statement against outrage culture (the Gold Lion was awarded to Todd Philips’ Joker).

The film’s press notes included an interview with Polanski in which the director openly admits to it being a very personal film, stating, “I can see the same determination to deny the facts and condemn me for things I have not done.” That might all be a bit too much for some viewers but, taken on its merits, An Officer and a Spy shows the director is still able to string together a decent thriller. Dreyfus was sent to Devil’s Island, a penal colony off the coast of French Guiana, for his troubles. Polanski has been a fugitive from U.S. justice for over 40 years, living in arguably more pleasant surroundings in France. It’s not difficult to see the director finding some kind of warped kinship with his subject. Take from that what you will.

An Officer and a Spy premiered at the Venice Film Festival.