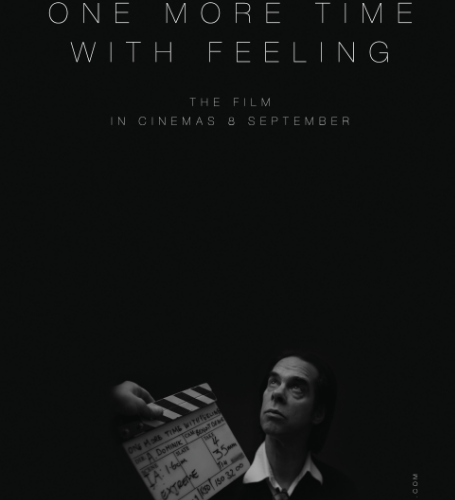 Is control a myth? Are accidents? Are our actions another variable in the randomness of the cosmos or are they preordained, at the mercy of the gods? These are just some of the questions swirling in Nick Cave’s head. Andrew Dominik’s devastating new documentary is, in essence, a 3D black-and-white, behind-the-scenes look at Cave and his Bad Seeds recording their new album (the excellent-sounding Skeleton Tree), but it also offers space for grief and reflection as the veteran avant-garde rocker struggles to come to terms with the death of his child.

Shot in the nowhere locations of taxis and studios in London — as well as a segment in Cave and partner Susie Bick’s home in Brighton — One More Time with Feeling might have been your run-of-the-mill making-of documentary, complete with late nights, frayed nerves, camaraderie, and in-fighting. Instead Dominik, with the staggering cooperation and openness of his subject, has produced something entirely raw and different.

There are five wonderfully-shot recordings of new tracks from the album, but these are book-ended by interviews with Cave, Bick, and long-time friend and collaborator Warren Ellis (who comes across as a friendly and strange music wizard), as well as lyrical ad-libbed narration from the great singer that ranges from off-the-cuff comments to poetry and lyrics from discarded songs. The picture that forms is one of a vibrant creative mind grappling with the impossible emotional complexities of such a loss. “You fell from the sky, crash-landed,” Cave croons. On July 14th 2015, while out taking LSD with friends, Arthur Cave fell off a cliff and died. He was 15 years old. The knowledge of that event acts as a terrible elephant in the room for most of the film — an awful but necessary backdrop — but it also gives tremendous weight to every other facet. Naturally, Dominik never pushes Cave on the subject; he even voices his own discomfort with him discussing the topic. We don’t hear the name “Arthur” for an hour and a half. We do, however, get Cave’s stream of consciousness, dealing with this tragic trauma while trying to consolidate it with his dwindling capacity to create and fast approaching old age.

For good reason, cinema rarely offers the opportunity to see a human wrestle with such dreadful things. The most remarkable thing about Dominik’s film is that we are not only humble witnesses to such personal grief, but that we are seeing it actively articulated by such a fascinating mind. Cave talks about how time has become abstract to him, either all happening at once or stretching like an elastic band. We see his inner turmoil at how life has changed for him since his son’s death, how people look at him, how he looks at himself, how his skin is the same but everything else is forever altered. At one point early on he says, “Why work out the chords to an improvised song?” Of course, Cave knows as well as anyone that life itself is improvised, and One More Time with Feeling is about a man’s attempt to remember the chords to the song.

One More Time with Feeling premiered at the 2016 Venice Film Festival and hits theaters worldwide for one night only on September 8.