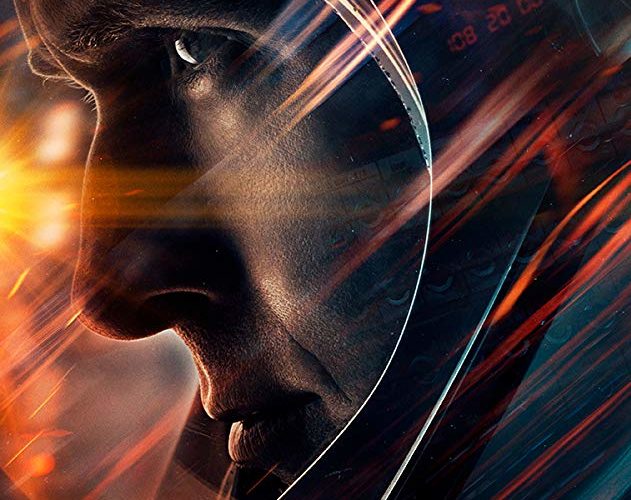 “When you get a different vantage point, you get a new perspective,” says Ryan Gosling to a group of NASA officials recruiting astronauts early into Damien Chazelle’s majestic First Man. At once cosmic and domestic, the director’s La La Land follow-up zeroes in on a man struggling for success with an unshakable, otherworldly willpower. In that, First Man is unmistakably Chazelle: Gosling’s Neil Armstrong fits nicely in the universe of career-driven, uber-determined workaholics the 33-year-old director has been following since Whiplash. But in its tragic undertones, complex psychological edifice, and claustrophobic visuals, First Man stands out, in both content and form, as a remarkable, jaw-dropping departure from anything Chazelle has previously made.

Based on the book by James R. Hansen and written by Josh Singer (Spotlight, The Post), First Man opens eight years before the moon landing, chronicling Armstrong’s ascent from NASA recruit to Apollo 11 captain. It is far less interested in hailing an era-defining triumph of American might (to which it devotes the feature’s closing chapter) than chronicling the plight of a man who lost a 2-year-old daughter to a brain tumor, and whose urge to “find a new perspective” constantly seesaws between a will to exorcise her memory and remain grounded on it.

Nathan Crowley’s production design faithfully resuscitates a 1960s American middle-class life. Consigning its protagonist to an ordinary milieu, First Man strips pre-landing Armstrong of any heroic fanfares, with Gosling delivering a terrifically understated performance as a beguilingly ordinary introvert of few words and unexpected glimpses of dry humor and affection. “He knows all sorts of musical tunes,” says his wife Jan (an outstanding Claire Foy) to Armstrong’s coworkers over supper, in a cheeky meta-textual nod to Gosling’s post-La La Land’s universe. And while First Man may strike as a one-man show, Chazelle excels at teasing out the very earthly repercussions of Armstrong’s obsessive quest, as seen — and suffered — through the eyes of his loved ones.

First Man floats in space as much as it stays on the ground: even when it turns to Armstrong’s famous exploits, Tom Cross’ editing take us back and forth from the man’s extraterrestrial meandering to his wife’s domestic struggles. And Jan, to paraphrase Alan Bennett, is far more than a woman trailing behind history with a bucket: the otherworldly cool with which Gosling’s Armstrong handles a spacecraft drifting at 360-degree spins above the earth is just as impressive as her stoic resilience in a world where death is simply part of the job (“we got good at funerals,” she tells a dumbfounded couple after attending one for her husband’s fellow pilot).

In one pivotal scene that predates Armstrong’s departure for the Apollo 11 mission, she snaps at his refusal to speak about the risks involved, and forces him to tell their kids he may never see them again. It’s a harrowing chat that Gosling half avoids through a press-conference style interview, his kids asking questions he laconically responds to, and in reinforcing a crucial rupture between First Man and Chazelle’s prior work, it crystallizes Gosling’s Armstrong as a far more fragile and intricate entry in the director’s pantheon of male heroes. “You’re a bunch of boys making models out of balsa wood,” Jan shouts to Neil’s superiors when things take a tragic turn. Watching Gosling struggling to hold the emotions in, a forced repression that can only be released away from other people’s eyes, her remarks reverberate with a sad echo. Contrasted with Jan’s indomitable and rational persona, there are moments when Gosling and his colleagues look like boys whose will to “make history” has trapped them in a protracted state of denial, and toy with vehicles whose lethal power is far clearer to their families than their own selves.

Shot by Linus Sandgren (La La Land, American Hustle), First Man echoes a Lubezki-like aesthetic, the camera effortlessly flowing with Gosling as he plays around with the kids and whispers into his daughter’s ears. Some images recall The Tree of Life, but their gentle beauty is brutally juxtaposed with the terrifyingly claustrophobic camerawork inside various spacecrafts, in a game of point-of-view and outstanding sound design that — in line with the film’s sanitized and anti-bombastic flair — portrays them less as technological wonders, more like howling metallic graves. First Man would be impressive even without the palpable fear that emanates from Gosling’s haunting breathing, the space helmet fogging up the camera’s lens, but it is that immersive experience that puts it over the top. The look on Gosling’s eyes as the moon materializes on the horizon, the lunar surface suddenly reflected on his helmet, captures the film’s magnetic dancing between tragedy and wonder. Nobody has taken us to space this way before.