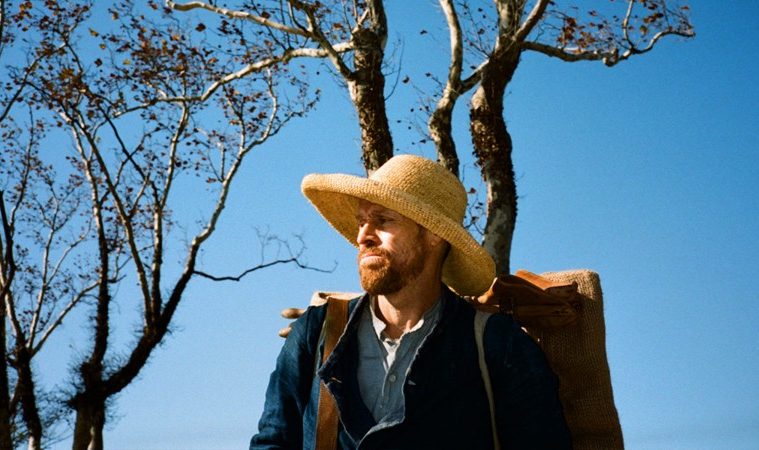 When Vincent Van Gogh stares at the flat southern France landscape in Julian Schnabel’s contemplative At Eternity’s Gate, what does he see? Cemeteries of dead sunflowers, fields of wheat, solitary trees standing calligraphic on the horizon, but in Willem Dafoe’s awestruck eyes and Benoît Delhomme’s spellbinding cinematography, the horizon becomes “nothing but eternity,” an early line that sets the elegiac and lyrical tone permeating the rest of Schnabel’s work. At Eternity’s Gate is a film made by an artist (“plates painter” Schnabel) less concerned with a painter, more with the way a painter saw the world. In its rupture from traditional biographical narratives, it does not merely stand out as unconventional biopic–it also comes close to resuscitating the idea of cinema as moving pictures.

Co-written by Schnabel and Jean-Claude Carrière (Luis Buñuel’s legendary scribe), At Eternity’s Gate opens in medias res. Van Gogh (embodied by a disturbingly uncanny Willem Dafoe in a career-high performance) is an unknown Parisian-stranded artist equally terrified by a chronic lack of money and the city’s wintry, grey palettes. “I want to find a new light for paintings we haven’t yet seen!” he tells a young Paul Gauguin (Oscar Isaac) after the two storm out of a fellow artists’ rendezvous, letting the action shift to the south of France, Schnabel trailing behind Van Gogh as he settles in Arles and starts looking for inspiration around the hills.

Slow-paced but never tedious, Dafoe’s countryside promenades fill much of At Eternity’s Gate first half, Delhomme’s lens struggling to capture all the vast wonder of Provence’s landscapes and Van Gogh’s reckoning with its boundless beauty. In that, Schabel’s exercise is one of subtraction: At Eternity’s Gate zeroes in on the tragic finale of a tormented artist’s life but strips it of any bombastic outburst of drama. There are walks, painting, and lots of conversations between Van Gogh and Gauguin, with whom Vincent’s brother, Theo (Rupert Friend), asked to settle in Arles to look after him. Ostensibly a one-man show, Schnabel’s own portrait of Van Gogh is built through the artist’s interactions with the “fellow human brothers” he desperately wants to blend in with, but also teach “what it is like to be alive” through his art.

Dafoe and Isaac exude chemistry and depth, the two giving birth to an artistic rivalry that, at its peaks, echoes the debates around an artist’s responsibility evoked by Andrei Tarkovsky’s Andrei Rublev over 50 years ago. Isaac is terrific as the half-ruthless, half-compassionate Gauguin, but he finds a great match with a criminally underused Mads Mikkelsen, a priest who runs the mental asylum Van Gogh is eventually locked in and scoffs at his “unpleasant, ugly art,” only to be shushed by Vincent’s sound theological arguments. After all, as he cheekily asks the clergyman, “wasn’t Jesus himself discovered until 30 or 40 years after his death?”

Chats abound in At Eternity’s Gate–which is not to say that nothing happens, but that Schnabel takes Van Gogh on a resolutely lyrical journey where any pretense of sensationalism is dropped for the sake of a quieter, more profound conversation about an artist and his craft. Possibly most illuminating in this respect is the fact that Schnabel refuses to show Van Gogh’s infamous act of self-mutilation, with an ellipsis fast-forwarding from the tumultuous ending of the painter’s friendship with Gauguin to his bandaged face, a harrowing look in Vincent’s eyes as a doctor asks why he chopped off his left ear off. Dafoe speaks of the voices that won’t leave him alone and the tragic scope of his craft: “I see things nobody else sees.”

There is something ineffably mesmerizing in the thought of watching an artist portraying another, but Schnabel takes the wonder to a whole new level. At Eternity’s Gate sometimes plays as a canvas of its own, not that in that facile and oft-abused “every frame a painting” maxim, but in a much more primordial sense, where the camera behaves like a brush, caressing over Dafoe’s face in a riot of gentle and firm strokes choreographed by co-editors Luise Kugelberg and Schnabel himself. But it is in Delhomme’s outstanding cinematography that the visual experiments peak. Relying on a game of recurrent point-of-views may feel like a trite mechanism to get the audience to “see like” Van Gogh, but Delhomme perceptively adds a split diopter to the lens, giving way to a vertiginous effect that creates two depths of field by blurring the frame’s lower half and mimicking Van Gogh’s own oneiric oil canvasses.

As I braced for At Eternity’s Gate world premiere in Venice, I kept thinking about Dorota Kobiela and Hugh Welchman’s 2017 Loving Vincent, an ambitiously animated biopic that followed the Dutch painter’s life by recreating a world of undulating oil paintings onscreen. All its visual achievements notwithstanding, Loving Vincent sought to mimic an end-product, to look like a Van Gogh painting itself. Schnabel sets himself a far more visceral challenge: to immerse one in the eyes of a painter in the act of creation. His art was “at once entirely realistic and supernatural,” a critic says of Van Gogh in voiceover. It’s a statement that could easily apply to Schnabel’s own.

At Eternity’s Gate premiered at Venice 2018 and will be released on November 16.