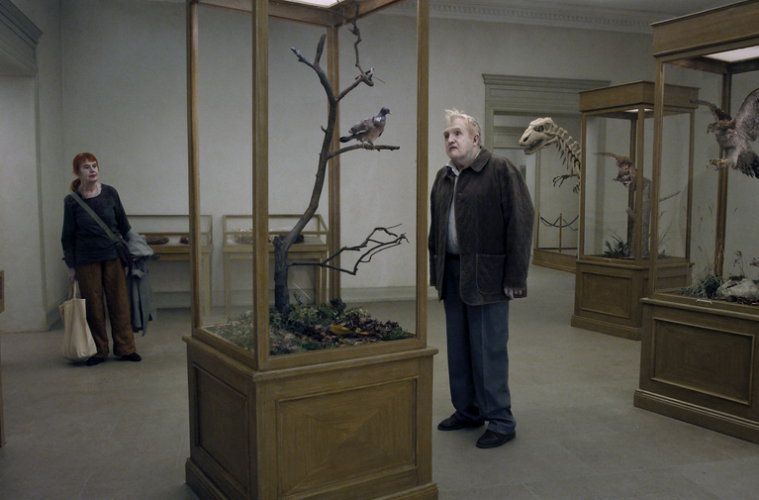 [Venice Review] A Pigeon Sat on a Branch Reflecting on Existence

Roy Andersson‘s films are a rare Swedish treat, only coming after we patiently wait for him to carefully assemble those meticulous Studio 24 sets necessary to his peculiar works. His latest, A Pigeon Sat on a Branch Reflecting on Existence, doesn’t stray from the template of 2000’s Songs from the Second Floor or 2007’s You, The Living — the first two parts of a ‘living trilogy’ now concluded — but stagnation is hardly an issue with Andersson. All three films are collections of modern-life tableaux, ranging from the trivial to the absurd and often merging the two. They invariably display tremendous wit and unsettling undertones during elaborate fixed shots where people barely move – yet the sketch is often over before you’re done processing the rich details and the amount of information it contained.

Within Pigeon is a loose narrative thread that follows two salesmen and their failed attempts to illustrate the virtues of half-price vampire teeth (“with extra-long fangs”) and “One-Tooth Pete” masks. Each new mini-episode carries no guarantee of who’s going to show up, though. You could be looking at yet another doomed sales pitch in a grimy café for a few minutes before Swedish King Charles XII stops by — horses and army in tow — for a glass of water on his way to a Russian war campaign. The humor wouldn’t work (nor exist, for that matter) in a more traditional mise-en-scène. In Andersson’s cinema, the images come before anything else — plucked from a dream or logically played out in his mind, the director lines them up in storyboard form and then proceeds to build whatever set his fantasy needs. The years seem to have pushed Andersson outside more and more often, but the room remains his natural habitat. Not unlike an upside-down counterpoint to Ulrich Seidl’s latest documentary, In the Basement, this constant tension between a confined space and the human oddity inside it fuels these vital, moving, and often simply laugh-out-loud creations.

Andersson’s exteriors, rendered digitally for the first time with DP István Borbás, are rendered even more sharply in charcoal-like contours, a pleasing reminder of the huge influence painting has on the director’s style. Inside, his rooms, bars, hallways, and offices drown in a sea of muted colors, a visual tidiness highlighting his famous compositions. No room is ever sealed off in Pigeon, and the customary use of deep focus means there are always door frames within door frames, teasing nesting-doll miniatures of the main shot, or large windows to let depth of field run wild.

The camera is always at a distance, too. The palish, grey make-up covering the actors’ faces is simply presented and never investigated, turning the repetition of leitmotifs like “I’m happy to hear you’re doing fine” and “we want people to have fun” into yet another macabre source of irony.

Death and despair are explicitly present throughout the film, whether it’s following the salesmen from one store to the next, or moving from a flashback to a dream. (An impromptu song-and-dance number at Limping Lotte’s bar, with its sudden glimpse into 1943, is among the best Andersson sequences ever.) It’s a gloomy feeling, not devoid of a certain disorientation — like “a horrible thing happened, and I was part of it” — but there’s immense pleasure in it all.

A Pigeon Sat on a Branch Reflecting on Existence premiering at Venice and is seeking U.S. distribution.