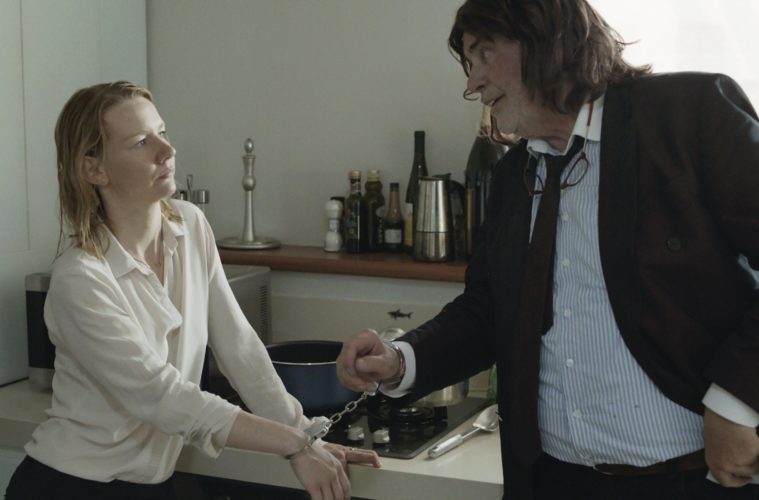 Most will begin talking about Toni Erdmann by noting that it is indeed very funny — not in some “obscure, European” way, but with plenty of lowbrow jokes and prominent use of false teeth. And then they’ll note that, yes, it is long at 162 minutes — but not (necessarily, or always) to its detriment, since the thing’s so packed with incident and encounters to turn over that the minutes melt away. But once those aspects have been noted, you can go so many other places — its dead-on parody of contemporary corporate culture, the shifts between micro- and macro-level considerations of a relationship with one’s parent, the intricacies of two standout scenes that earned applause amidst Cannes screenings — and I won’t tell you what to do.

Except, of course, to just see Toni Erdmann, the third feature from German writer-director Maren Ade — previously of The Forest for the Trees and Everyone Else, further dives into extreme social discomfort and general malaise. I’d also advise that you don’t watch the U.S. trailer, which, regardless of misrepresenting tone — that string backing sure doesn’t fit the film’s relentlessly quiet atmosphere — also gives away a couple of major images in its promotional flurry.

Take my word, as well as what was said in our rave review out of Cannes. As we said then, “Maren Ade has kept us waiting. It’s been seven years since her superb second feature Everyone Else premiered at the Berlinale, taking home the Jury Prize, and she’s spent the interim collaborating on the production of other people’s films (e.g. Miguel Gomes’) rather than releasing one of her own. Now that her new directorial effort is finally here, it validates all the eager anticipation, as Toni Erdmann is one of the most stirring cinematic experiences to come around in a long time.”

The preview can be found below.

Winfried doesn’t see much of his working daughter Ines. The suddenly student-less music teacher decides to surprise her with a visit after the death of his old dog. It’s an awkward move because serious career woman Ines is working on an important project as a corporate strategist in Bucharest. The geographical change doesn’t help the two to see more eye to eye. Practical joker Winfried loves to annoy his daughter with corny pranks. What’s worse are his little jabs at her routine lifestyle of long meetings, hotel bars and performance reports. Father and daughter reach an impasse, and Winfried agrees to return home to Germany.

Enter flashy Toni Erdmann: Winfried’s smooth-talking alter ego. Disguised in a tacky suit, weird wig and even weirder fake teeth, Toni barges into Ines’ professional life, claiming to be her CEO’s life coach. As Toni, Winfried is bolder and doesn’t hold back, but Ines meets the challenge. The harder they push, the closer they become. In all the madness, Ines begins to understand that her eccentric father might deserve some place in her life after all..

Toni Erdmann will begin its U.S. release on December 25.