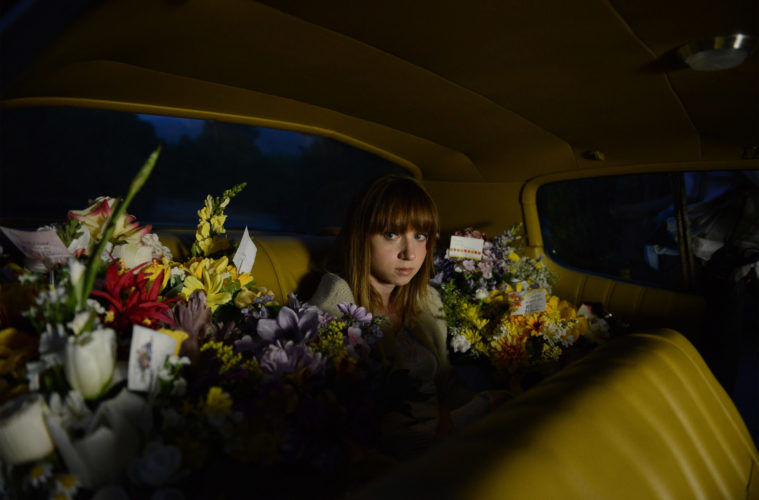 [Tribeca Review] The Pretty One

Although only coined in the last decade, the “Manic Pixie Dream Girl” archetype can be traced back to screwball comedies and has been spoofed as early as Annie Hall. But there is no trope more overused in 21st century independent American comedies than the MPDG, who has taken the level of quirk, depression, and indie-music love to previously unseen levels of prominence. That the character is itself problematic only makes this trope worse. The MPDG generally has no inner problems of her own and essentially degrades the female—especially the cinematic female—to a dangerously reductive social role. Often the trope is played straight, as in the aforementioned Elizabethtown or Garden State, just as often now are attempts to subvert it. (500) Days of Summer fetishizes such a character only to mock the fantasy of it, Eternal Sunshine of the Spotless Mind complicates and attempts to denounce the fantasy but has its priorities elsewhere, Silver Linings Playbook gives her a Manic Pixie Dream Guy counterpart in an attempt to level the playing field. Some such subversions are effective, others less so, but all still romanticize—fetishize, even—the notion of the ideal and unrealistic girl.

Last year, it was Ruby Sparks that tackled the trope, literally displaying the will of the male ego to create such a character, highlighting the fragility and egotism around it, and ultimately denouncing it as a problematic vision of female romanticism. That film had its problems too, glorifying the MPDG and ending in an overly crowd-pleasing way. This year we have The Pretty One, the debut feature by Jenée LaMarque and the most effective deconstruction of the trope’s sexism yet. Zoe Kazan (who also wrote and starred in Ruby Sparks) plays the twins Laurel and Audrey, the former of which is shy and insecure, living at home to assist her dad with painting and making breakfast at home. Laurel has abundantly long hair, refrains from make-up, and is introduced to us awkwardly and unromantically losing her virginity to a boy she used to babysit. Audrey no longer lives at home is more confident, wears revealing clothing, appears to be the favorite of the father and his girlfriend (the mother, we learn, died somewhat recently) and is the object of everyone’s desire, including the aforementioned boy. Audrey decides to break Laurel’s shell and takes her home, and on the way Laurel cuts her hair (“Make me look like her,” Laurel commands for an earnest laugh). But then something terrible happens. The two are in a traffic accident that incinerates Audrey and leaves Laurel with post-traumatic amnesia, but everyone mistakes Laurel for her sister because of her new haircut. She suddenly finds herself living both a nightmare and a perverse fantasy. Everyone has wondered how friends and family would react at their funeral, and Laurel gets that chance; at the same time, when her dad’s girlfriend says that “it’s better it happened this way” (in a pivotal but sadly unconvincing scene), she loses the courage to tell the truth, and she finds herself not only searching for her identity even more than before, but also to people repeatedly trying to put her in the box they want her in.

If that last part sounds like an acutely aware indictment of the cinematic MPDG, it is; we aren’t quite given enough of Audrey to flawlessly apply the label, but if we take the small leap, The Pretty One emerges as an enthralling metatextual deconstruction of the trope’s inherent problems. Laurel is, on one-hand, trying to occupy what she always imagined as Audrey’s great, fun-filled, romantic life; on the other, she is struggling quite literally to be herself, not who those in her life (men especially) want her to be. By any standards, she is forced into being a character who she does not want to be, and where The Pretty One succeeds most is in presenting it as an unpleasant experience throughout, where being told that she’s “always” been good at something or that she’s been loved by a man “since the moment he saw her” comes with grim implications. The identity chasing is brought to the surface when Laurel and her love interest begin swimming in the neighbors’ pool and playfully assume the identity of the parents in the process or when a major scene takes place on Halloween—the day everyone willfully gets to be someone else and everybody knows it. With an admittedly heavy-handed irony, these moments highlight how Laurel is loved for who she isn’t and rejected for who she is, but they still function as reminders are queues to the film’s occasionally brilliant subtext. On a moment-to-moment level, The Pretty One unfolds at an appropriate pace with a fair share of laughs, albeit with a handful of grating plot developments and details that undermine the thematic depth. Some events are uncomfortable and close to offensive in their treatment and understanding of family, and when Laurel returns home near the end of the film, things are far too neat to be meaningful or realistic, and much of what The Pretty One works for threatens to fall apart.

The film’s great missed opportunity lies mostly in LaMarque’s composition and framing, which pivots uncomfortably between the conventional and a less confident rip-off of the quirk that Jane Campion captured in her own dysfunctional family drama, Sweetie. Despite the occasional half-hearted attempt to undermine the indie-comedy that the offending MPDG trope is so commonly associated with, LaMarque never takes a full stand in subverting the syntax, which has become largely cliché in the past decade or two. The opportunity further presents itself in the recursive role that painting has in the film, but that subplot meanders without ever going anywhere despite its intrigue. It’s when The Pretty One focuses on Laurel’s identity crisis in the smallest and most intimate of moments that it truly shine. It’s too bad that subplots and clichés hold the film back from being a truly special indictment of the Manic Pixie Dream Girl. Even still, it’s a funny and unpretentious study of identity.