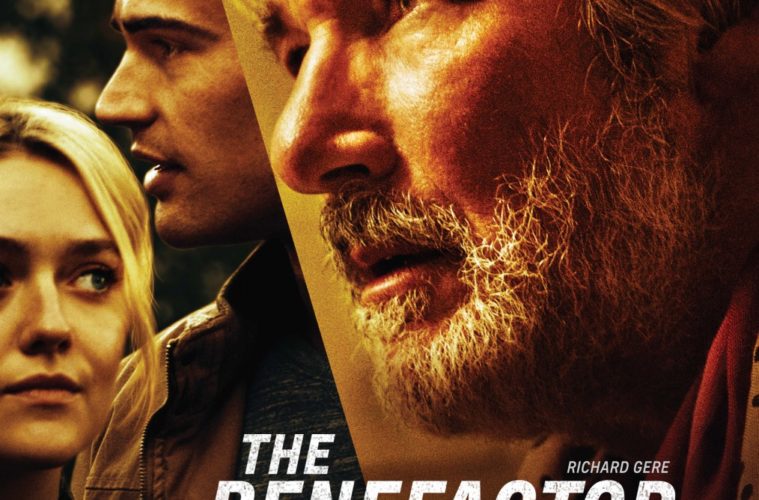 Seeking out substantial leading characters of complexity within independent dramas in recent years, Richard Gere has delivered accomplished performances in Arbitrage and Time Out of Mind. He’s now found another with The Benefactor, the directorial debut of Andrew Renzi, which follows Gere as the title character, a profoundly rich philanthropist who enjoys helping out those close to him while he struggles with his own demons of addiction. While this set-up could pave the way for a dismal odyssey into depression, Renzi’s warm tone and Gere’s spirited performance make this a cut above the standard drama about dependence.

We first meet Gere’s Franny as a clean-shaven businessman planning the building of a new children’s hospital with his best friend (Dylan Baker), accompanied by his wife (Cheryl Hines). While Franny enjoys the live of a single man with little obligations, his friends have a daughter, Olivia (Dakota Fanning), who he also considers his own. After a tragic accident leading to the death of her parents (perhaps caused by Franny distracting in the backseat), we cut five years later where we find him living a lonesome life in a luxury suite of a hotel. Looking like a “wizard” with an unkempt beard, long hair, and his eccentric robe, he’s still taking heavy doses of hydromorphone, despite his injuries from the accident having long healed.

With a phone call from Olivia revealing she’s gotten married (to Theo James‘ character, Luke) and is pregnant, she re-enters Franny’s life. Indebted to helping her out as the only father figure she has left, he gets Luke (who recently graduated medical school) a job as a doctor, pays off his student loan debt in the hundreds of thousands and buys them the house in Philadelphia she grew up in. In return, Franny outwardly insists he expects nothing, but this generosity begins to weigh especially on Luke as conflict arises with Franny’s addiction and desire to be in their lives.

As a fast-talking, boisterous individual with the right quip for every exchange, Gere embodies this entertaining side, but also excels in dealing with the character’s darker vices. With a loneliness  behind his eyes even when he’s around his closest acquaintances, it’s a tender performance that helps keep one invested when Renzi fails to create equally compelling supporting characters.

Although it’s Gere’s show from top to bottom, one wishes Renzi gave more insight into Luke and Olivia’s side of the story as each lack considerable depth. They seem to be altogether forgotten, particularly in a third act stretch as we deal with Franny’s search for more narcotics, an unfortunate issue considering how vital Olivia and Luke seem to be in his motivation for seeking help.

Gorgeously shot on 35mm film by Joe Anderson (who has worked on Ain’t Them Bodies Saints and Martha Marcy May Marlene), there’s a richness to the cinematography that, along with the central performance, hearkens back to a character study from a few decades prior. For a feature debut, Renzi announces himself as a capable director who, in the future, should extend the same amount of control with his script. Featuring a sympathetic turn as a deeply flawed individual, without Gere, The Benefactor certainly wouldn’t have worked as well.

The Benefactor premiered at the 2015 Tribeca Film Festival and opens on January 15th.