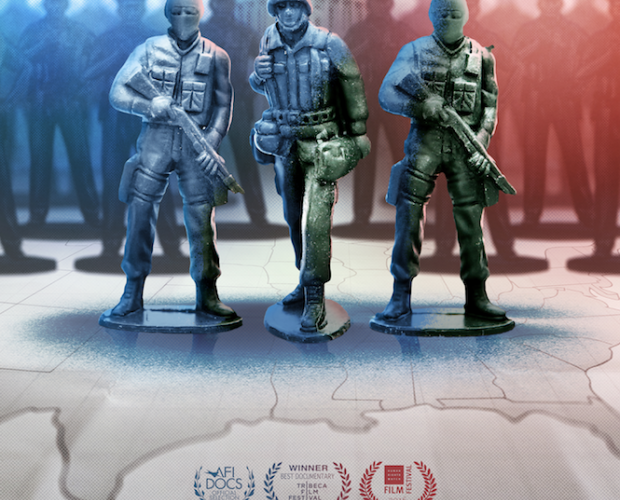 [Tribeca Review] Do Not Resist

A film that may lead to important conversation regarding where the ethical lines are drawn between advancing technology and the extent to which peaceful protest must be respected free of government intimidation, Do Not Resist attempts to present a fair inquiry of police’s use of force. The issue itself is fraught with conflict and, unfortunately, the interest of immediacy of the conversation seems to trump thorough journalism.

Director Craig Atkinson opens the film with a range of footage shot on-location in Ferguson, offering rare glimpses of humanity in policing — including two verbal standoffs between officers of color, one unidentified, the other Ron Johnson of the Missouri State Highway Patrol, who listens to and attempt to quell young men looking for answers in the violence. Ferguson, of course, is a tinderbox that requires careful analysis; watching Do Not Resist, I kept wishing Frederick Wiseman was on the ground observing both sides carefully. The search for answers at the core of Do Not Resist seems to come up short. If you’re paying attention — and have seen the focused Killing Them Safely and Peace Officer — you should be troubled by where that line is. Arguably, the availability of smaller cameras — including civilian cell phone video as well as police body and vehicle cameras — is pulling back the curtain on decades-old policies and procedures.

Darting between talking heads discussing technology in policing and police training, the political fallout of funneling military surplus assets to local police departments that rarely face the challenges necessitating them, and the notion of carelessly destructive no-knock warrants, Atkinson covers a lot of ground with too little depth for its short running time. While the film is helpful as a conversation-starter offering unprecedented behind-the-scenes access, including a SWAT team ride-along that yields virtually nothing for their trouble, it’s not particularly groundbreaking. Atkinson appears not to know what to make of Ferguson despite capturing some interesting moments in the chaos, including candid instances of police officers taking breaks in staging areas to watch sports on a jumbo screen and an officer asking another if she’s having fun before offering a playful shield bump – all while defending one city’s system of unconstitutional and racist policing.

Making an alarming case for big data in policing, the film also seems to miss a key element that should raise your blood pressure: the fact that these innovations can be paid for by selling data to the private sector, including repo men and others looking to locate someone for private business purposes. Taking innovation to its very end, an academic comes to very shocking conclusions based upon the kind of predictive analysis that veers into Minority Report territory. Should we be worried? Yes, and while Killing Them Safely offered a comprehensive analysis of Taser International’s operations and political influence, Do Not Resist seems to resist an analysis of the economies and profit motives driving the technology at the heart of the war on drugs, the development and implementation of new police toys, and Ferguson’s own pyramid scheme to fund municipal operations on the backs of poor people of color.

Do Not Resist premiered at the Tribeca Film Festival and opens on September 30.