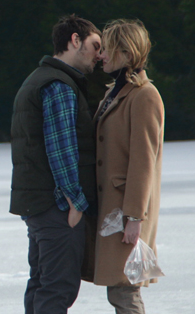 Inspired by a true story, director and co-writer Mo Ogrodnik finds perhaps the least interesting way to tell what might have been a compelling narrative. I’m instantly weary of a film that opens with quasi-documentary footage; normally I find it, like Robert McKee, to be bad story telling, but it has worked in effective films. Here, rich kids talk initially talk about prep school, but they aren’t nearly as smart and witty as Whit Stillman had led me to believe they are.

Haley Bennett plays Natasha, a member of a ski club. She falls for a poor, ambitious, college dropout Danny (Shiloh Fernandez) with dreams of going pro, but he’s told to settle for the affordable community college. The year is 1982 and the setting New England, although there are little references to pop culture or 80’s movies ski tropes. The film plays it safe, taking itself too seriously for its own good – and where’s the fun in that? Deep Powder is deeply flawed, focusing on a romance that never quite seems convincing, with its clunky mechanics of documentary footage functioning as a lazy form of voiceover for actions we’ve either seen or should see. This is a violation of the screenwriting’s first rule: show don’t tell! Natasha volunteers to go alone to South America to score some primo coke for the Deep Powder Alpine Cross Country Club, and of course, Danny cannot let her go alone. He crafts a secret compartment in a ski to smuggle the cocaine back, leading to a dangerous adventure in South America; the section where the film finally has a little bit of life.

While the actual prep school drug smuggling ring was a real thing, the romance is a boring artificial construct, like a Dawnson’s Creek storyline that overstays its welcome. Ogrodnik has chosen a middle of the road way to tell the story, one where common sense has no place and where we’ve seen this romance time and time again.

Deep Powder has no interest in Larry Clark-style realism and instead feels stiff and lifeless. The romance is passionate because we are told it is, the cinematography by Michael Simmonds does what Ogrodink and Matt Bardin’s script asks it to do, while being far too restrained for its own good. The film’s direction is quite simply unimaginative, despite some good performances.