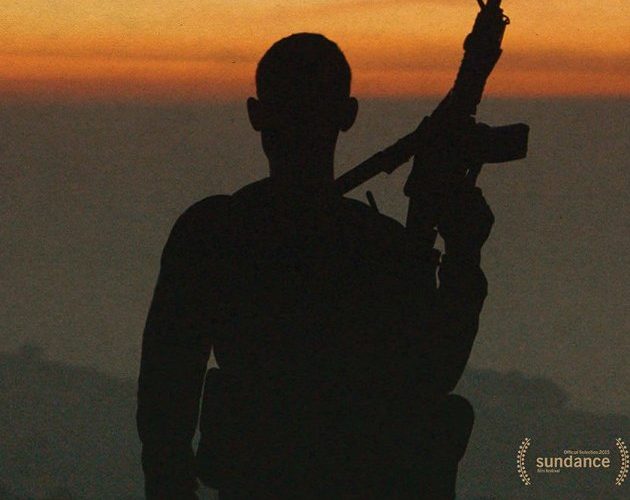 Following in the footsteps of the late, great, cinematic badass Michael Glawogger, whose work often put him on the front-lines of the most dangerous jobs (or at the very least unsavory situations), Cartel Land finds a certain humanity in the work of militias on both sides of the U.S.-Mexico border cartel fights. Directed, produced and filmed by Matthew Heineman, the documentary dives deep into vigilante culture, chronicling the struggles of the Autodefensas, an organized militia who takes up arms against the Knights Templar. On the U.S. side of the border in Arizona’s Altar Valley, Tim “Nailer” Foley heads the Arizona Border Recon, a group that patrols the Valley, turning over smugglers and their advance men to US.. Customs and Border Patrol. The approaches are similar while the motivations of each are complex; Nailer and crew’s story is overshadowed in Cartel Land by the compelling, immediate on-the-ground reporting of its Mexican passages.

While not exactly uneven, Heineman’s pictures is asymmetrical with material worthy of two compelling documentaries. Nailer’s story is the less interesting of the two perhaps because it is the more familiar story. With reasons that make sense for us (and him), he takes the border while others in his group harbor the kind of sentiments that would alienate the liberal film festival audience seeking out Cartel Land. In this respect, Heineman reluctantly plays it safe. Political and personal, Heineman’s lens remains focused on the front lines and not the backrooms as the theme of border security is the relevant one here. Nailer and his old lady view themselves as patriots offering a supplemental service to the CBP (at least when captured on camera), while the Autodefensas are more sinister as we discover once the film reaches a turning a point. Due process is not something they’re interested in, in a stirring sequence where a cop with Templar connections is kidnapped by the Autodefensas in front of his family.

Cartel Land is surprisingly effective in its on-the-ground approach, first introducing us to a group of meth cookers who claim to produce the finest product in Mexican state of Michoacan, in a kind of tease for what is to follow. The Autodefensas are a movement larger than the man who funded its creation — doctor Jose Manuel Mireles, a grandfatherly figure and wealthy man intent on bringing an end to the violence — handing out white shirts and guns village by village in Michoacan. The movement co-exists alongside federal agents who often watch without intervention as Mireles makes his cases. Heineman is given intimate access, capturing the carnage of the front lines and moments of retribution as the Autodefensas, at times, are interested in revenge take back their streets.

The movement isn’t often as triumphant as it appears. Heineman also chronicles the in-fighting and fracture of the movement as they seek legal legitimacy as required by Peña Nieto’s government. The approach and style of the film, shot in wide-screen by Heineman and Matt Porwoll, is immediate, including the on-the-ground town halls, foot patrols and fire-fights, without allowing its style to overtake its substance. While the American passages simply aren’t as interesting (and feel as if they could be relegated to a DVD extra), the material story of Autodefensas from strength to dysfunction and “legitimacy” is worth telling, and here, the ethical grey areas are masterfully captured.

Cartel Land is now screening at the Tribeca Film Festival and will be released in theaters on July 3.