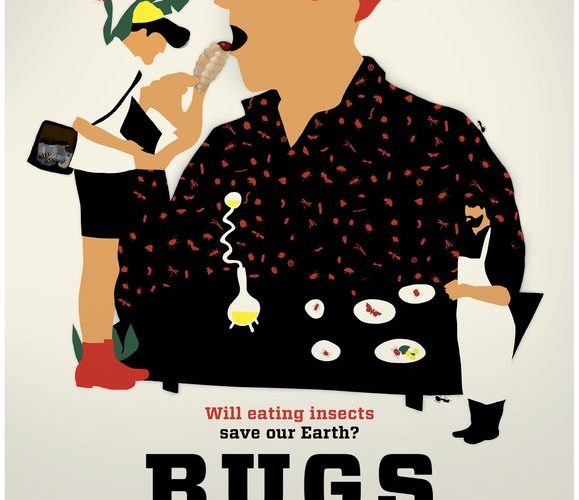 Somewhere between Jiro Dreams of Sushi and Food, Inc., at the intersection of culinary adventure and social justice, Nordic Food Lab’s head chef Ben Reade and lead researcher Josh Evans are on a mission to bring sustainable, delicious and culturally appropriate foods to the planet’s underserved. Examining ratios like the efficiency of protein production the duo’s journey takes them to all over the world from Kenya to Australia with a stop in Japan as they hunt for the most delicious and nutritious bugs and the best ways to prepare them.

Andreas Johnsen’s hugely entertaining Bugs documents this open-ended quest as the pair work in collaboration with the locals to prepare culturally appropriate meals including tacos, maggot cheese gelato, cricket and grasshopper ravioli as well as insect-based coatings and flowers. The team spends its time making its case to the lab’s advisory board that these foods can be cost effective and sustainable under certain production conditions. This isn’t quite farm to table; in many cases Reade and Evans are digging for buried treasure on a quest for “proper food” as they call it, free from the industrial process. Citing that a single hamburger can contain meat from 400 cows, creating patties from smaller insects seems more natural. In one passage, Reade, a fiery young man who could easily be played by Domhnall Gleeson in a narrative adaptation, proclaims while eating a raw catch that its like “pulling honey from mud.”

Enter industrial farming, a primitive example of which they find in Kenya where young men have gone blind foraging in the evening under brutal lights. Reade also finds himself at an ethical crossroads once industrial giants take an interest. Nothing is farm to table for long, especially when there are big profits to be made and giants like Nestle and Cargill offer their curiosity. Calling out products that include insects for a buzz factor, the team faces an incredible challenge as they make their case to regulators that these items can be a viable food source. Unfortunately, the research of the non-profit, self-sustaining Nordic Food Labs is about to be drowned out by big agriculture and their profit motive.

While Bugs is a brief yet fascinating culinary adventure in the vein of some of the more extreme shows you’ll find on cable TV, it never overstays its welcome nor does the filmmaking dive into full-fledged manipulative activism. Johnsen allows its subjects to do most of that work, providing only interstitial statistics that its heroes come to doubt. While the barriers to innovation depress, the film never does thanks to its engaging subjects who for much of the film approach the challenges with humor and enthusiasm.