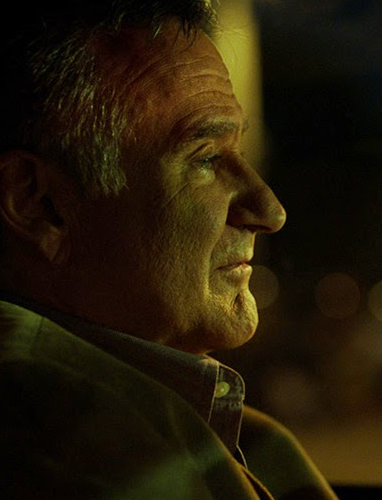 An unexpected turn for director Dito Montiel, known for his portraits of rugged masculinity in the inner city, including his debut future A Guide to Recognizing Your Saints and Fighting, Boulevard is a tender portrait of a man about to shatter an illusion he’s created for himself. Opening with an out-of-focus shot of Nolan Mack (Robin Williams) coming to terms with the eventual death of his father, Nolan, like his father and the audience, are not “present” in the moment.

Nolan lives a low-key life, married for several years to Joy (Kathy Baker). They share an empty house and live separate lives, tolerating each other as roommates with little in common. Their evenings, including those with friends, are met with little conversation. He’s quite and well-liked at his job, although there he is also not present, despite being up for a promotion from assistant to branch manager for a regional bank. He’s reluctant really to do anything that rocks the boat.

Confiding certain things with pal Winston (Bob Odenkirk), a college professor whose dating one his graduate students Patty (Eleanor Hendricks), the two often reminisce about a time before he met Joy when they had plans to hit the city. Never materializing, they both become comfortable, but the nature of this relationship isn’t quite explored, while Nolan comes to terms with his own sexual repression. The event is triggered when, after visiting his father in a nursing home, he decides to pick up Leo (Roberto Aguire), a male prostitute. At first the intentions don’t seem entirely sexual; Nolan is easing himself out of the closet, while for Leo it’s purely a business transaction, of course rehashing the same sad story we’ve seen time and again. Boulevard cracks it thanks in large part to its restraint. Both Williams’ performance and Montiel’s direction transcend what could have been a simple melodrama into a moving character study.

Leo shares a common backstory, living hard and on the edge while serving his pimp, Eddie (Giles Matthey), in gritty, effective scenes. In control of the tone, the story builds to a conclusion that seems realistic, although it edges towards breaking the careful restraint and nuance of the previous scenes. Written by Douglas Soesbe, the story almost evolves into the kind of narrative where both Leo and Nolan save each other and quickly backs away. As a customer, Leo respects the boundaries while Nolan explores emotions previously repressed.

Recalling Jacob Tierney’s Twist, the 2003 adaptation of Oliver Twist set in the back alleys of Toronto’s skid row that had starred Nick Stahl, location is key to Boulevard. Filmed in Nashville instead of Montiel’s native New York City (a setting key to his previous work), Nolan’s journey does indeed involve more driving than one does in New York City. And in doing so, naturally, less human contact and less avenues for exploration add an extra layer of danger and sadness to his journey. Boulevard is powerful, despite recycling elements from other stories, and makes for a strong journey that again shows Dito Montiel to be a curious crafter of character-driven stories.