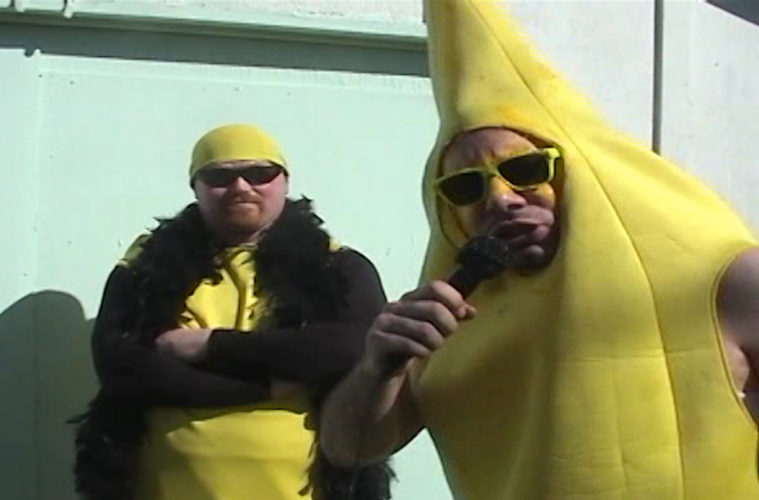 Existing at the edge of performance art, Bodyslam: Revenge of the Banana! chronicles a band of misfits who aren’t degenerates in real life but enjoy playing them on stage. An unexpectedly engaging history of the Seattle Semi-Pro wrestling league, we follow the group of amateur wrestlers who meet once a week and pretend to beat each other up in absurd costumes. Enter the villain: The Banana (Paul Richards), who is  presented to us at first as a likable, hardworking guy — that is until the mid-movie reveal that he’s also a villain off screen. The allegiance shifts as the film evolves into a kind of political triumph the first act doesn’t prepare us for; such is the nature of non-fiction filmmaking.

Directed and edited by Ryan Harvie and John Paul Horstmann, Bodyslam: Revenge of the Banana! follows a likable group of underdogs as they struggle to keep the performance alive. An underground history pieced together from VHS tapes likely found in someone’s mom’s basement, it culls together a history of the group and The Banana. Featuring The Banana taking on a pack of McDonald’s fries to representations of George W. Bush and Dick Cheney on stage (the outrageous Jackass-style pranks are kept off stage), we have a variety of topical performance art pieces that ought not to be read and analyzed too deeply. They are only fake, as we learn from an insightful training session on how to take a punch and fall.

As a character study, Bodyslam is unexpectedly rich, chronicling Richards, a fellow who overcame a broken household, running away from home only to return to Seattle following his mother’s death. He’s hardworking and resourceful, from paying off the mortgage on his home with found money to creating costumes for the Banana and the sidekick forced upon him, The Second Banana (Luke Keyes). His stage presence, including the introduction of a sidekick, ultimately forces Richards out of Seattle Semi-Pro, causing him to complain to the state’s sports licensing board. The political battle for legitimacy comes into play in the film’s third act as the “league” is issued a cease and desist order. The issue is apparently of interest to law enforcement as an unamused officer shows up stone-faced to a performance and writes a report of what he’s seen, in the film’s funniest sequence.

Fighting all the way to Olympia, the league head Josh Black (aka Ronald McFondle) argues for legitimacy to the state’s licensing board; as a small collective supporting small business (local pubs), their desire is to remain small, local and independent. The Banana wants no part of the political struggle. He’s said his peace, done his damage, and despite the fond memories, his departure still stings.

Bodyslam: Revenge of the Banana! could no doubt inspire a narrative remake and that would partly be a shame. Directors Harvie and Horstmann achieve a kind of exaggeration: the naughtier moments on screen are no worse than Magic Mike — there exists, of course, a tinge of homoeroticism in wrestling and it’s not absent here — while the most outrageous accusations remain off camera. There is above all a kind of charm to the character we encounter and a freedom they find. Attending a Seattle Semi-Pro performance may be fun, especially three beers in, while Bodyslam: Revenge of the Banana! works having watched it stone-cold sober.

Bodyslam: Revenge of the Banana! is screening at the Tribeca Film Festival.