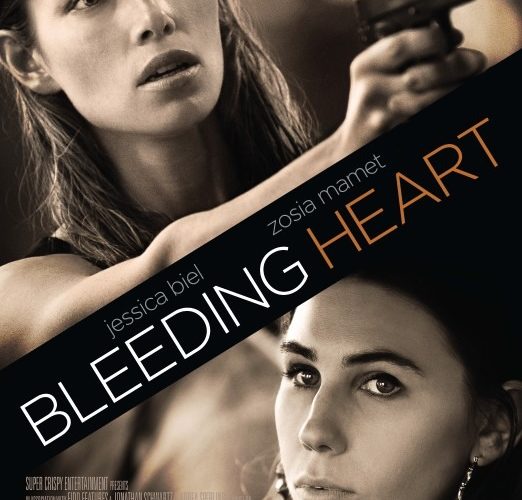 Suffering from performances, direction and writing that each lack nuance, Bleeding Heart takes subject matter deserving of mature, thoughtful treatment and distorts reality into a series of soap opera clichés. Written and directed by Diane Bell, the drama stars Jessica Biel as May, a yoga instructor living with boyfriend Dex (Edi Gathegi). Together they operate a yoga studio funded by May’s mother Martha (Kate Burton). Martha, while providing the kind of disapproving support that only a mother could, is not May’s biological mother, who remains largely off screen, despite something that ought to have been explored much deeper than the montage dedicated to it.

Bonding over drinks on the down low, it’s slowly revealed that Shiva could be more complex than she lets on. The problem is Diane Bell’s screenplay and direction brings everything to the surface. As the film progresses, the on-the-nose dialogue fails to engage. Despite effective moments, the ensemble is essentially handed everything, yet very little feels of importance or interest when it comes to the subject matter. This includes a rather frank scene the picture thankfully does not further engage in, featuring titillation for the sake of titillation concerning Shiva’s line of work.

Escaping for weekends at Martha’s house, May and Shiva bond in the standard montage of fun: swimming, smoking weed, and spanning time. While the female cast members lack nuance — perfectly articulating everything they are feeling at that moment in dialogue — the male characters are less interesting. While we understanding the economic decisions and violence that drive Shiva and Cody together, it is simply the only motivation. Cody shares a charming moment with Dex, but beyond that he’s a paint-by-numbers sketch of what could’ve been a genuine character. The film also doesn’t know what to do with Dex, a yoga instructor with a head for business; his interest in May also seems driven by economics.

There’s a certain power that more accomplished filmmakers would have in approaching this material, perhaps breaking from a traditional structure and ramping up the melodrama to camp in an effort to find emotional honesty along the way. A certain raw madness in direction might have benefited Bell’s heavy-handed screenplay. Dull and full of traditional conventions, Bleeding Heart is essentially a Lifetime Original Movie with a strong cast that are given little original to do.

Bleeding Heart is screening at the Tribeca Film Festival and opens on December 11th.