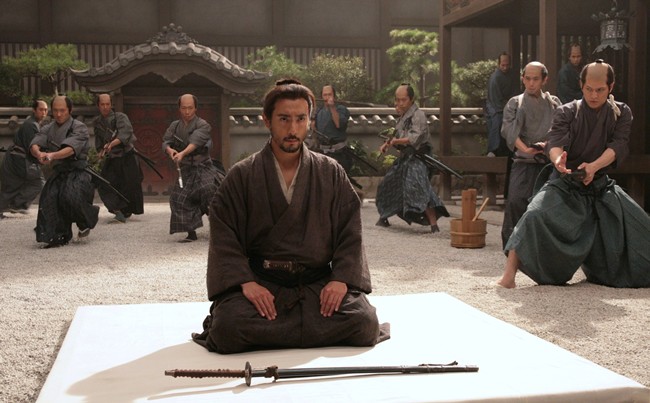 Despite having completed three films (and currently shooting his fourth) since his Hara-Kiri: Death of a Samurai, the prolific Takashi Miike (13 Assassins) is finally releasing that remake in the US this summer. We checked the film out last year at Cannes, which is based off Masaki Kobayashi‘s classic and weren’t fans of it.

Our review said this one is “a murky and static interpretation” and complained it “spends too much time establishing a kind of corny back story between Motome and Hanshiro to ever amount to much. Even the final climatic showdown between the soldiers of the house of Li and Hanshiro feels rushed and somewhat sloppily executed, opting for moments of high-pitched melodrama instead of the raw reality the samurai must endure.” Tribeca Film will now release the film next month and we’ve got the first trailer below via Apple.

From visionary auteur Takashi Miike (13 ASSASSINS) comes the story of a mysterious samurai who arrives at the doorstep of his feudal lord, requesting an honorable death by ritual suicide in his courtyard. The lord threatens him with the brutal tale of Motome, a desperate young ronin who made a similar request with ulterior motives, only to meet a grisly end. Undaunted, the samurai begins to tell a story of his own, with an ending no one could see coming. With stunning cinematography and gripping performances, HARA-KIRI: DEATH OF A SAMURAI is a thrilling exploration of revenge, honor, and individuality in the face of oppressive power.