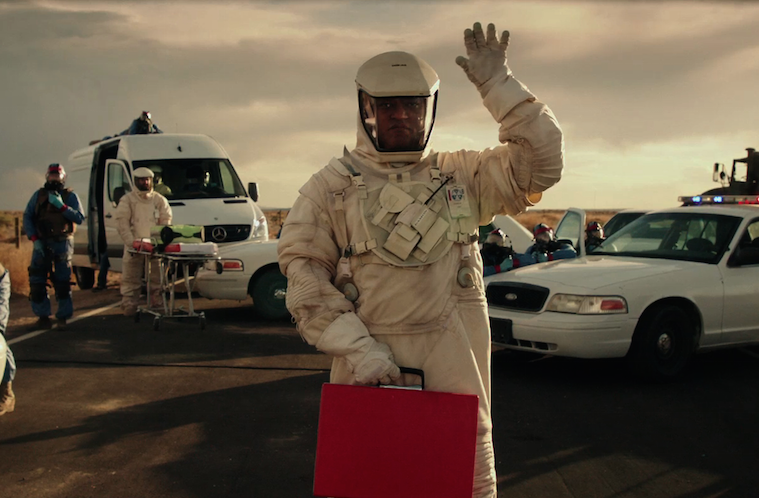 After working with Angels & Airwaves to create the cult hit Love, William Eubank followed it up with another sci-fi project, one that bowed at Sundance Film Festival earlier this year. The Signal — not to be confused with the 2007 horror film of the same name — follows three college students, two of which are hackers, who embark on a road trip and are drawn to a top, mysterious figure in their field, and then things go in a wild, seemingly terrifying direction.

We were mostly positive on the film at Sundance, saying in our full review that it’s “a clever mash-up of sci-fi tropes resulting in a very commercial friendly product that will likely appeal to a broad audience. Add one dash of The Matrix, one part Chronicle and a little Dark City thrown in for good measure and you should have a sense of what kind of flavors The Signal is attempting to emulate. The story is also filled with some great misdirection resulting in some unexpected twists and turns that are genuinely surprising. Yet despite a healthy pedigree of movies that it draws from, The Signal is dulled by the fact that it borrows these concepts without innovating on them enough.”

Ahead of a summer release, the first trailer has now landed for the film starring Laurence Fishburne, Brenton Thwaites, Sarah Clarke, Olivia Cooke, and Beau Knapp. While there’s a few flashes of enticing imagery, it doesn’t look to spoil a great deal, so check it out below, along with new stills and a teaser poster, and let us know if it’s now on your radar. The Signal arrives on June 13th.