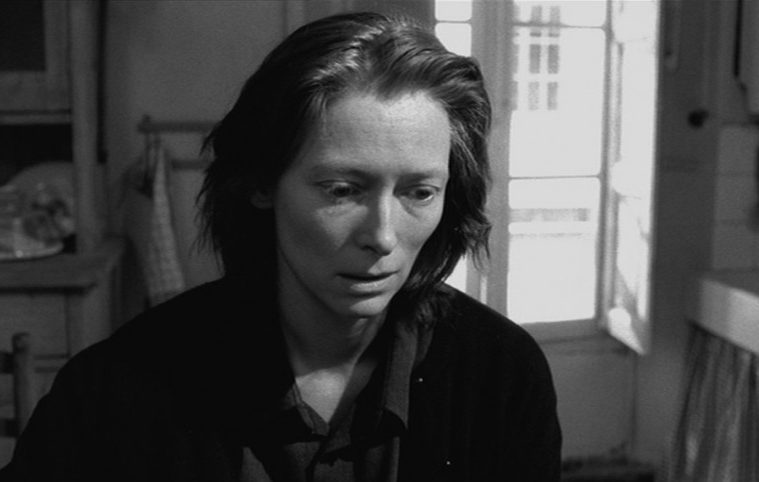 Upon the release of The Man from London, one might have been hard-pressed to consider Béla Tarr and his co-director Ágnes Hranitzky genre filmmakers beyond the broad designation of “European art house cinema.” While still fitting snugly under that banner (particularly as the first of Tarr/Hranitsky’s films to premiere at the art house mecca that is Cannes), The Man from London marked a more explicit engagement with the codes of film noir — perhaps an obvious turn for filmmakers known for their for their profound darkness of spirit and imagery.

Adapted from George Simonen’s 1934 novel of the same name, itself adapted into films in 1943 and 1947, the film concerns the railway pointsman Maloin. After witnessing a murder from his tower, he retrieves the briefcase full of British pounds that falls into the pier, setting off a series of events involving him, his wife (Tilda Swinton), and his daughter (Erika Bók), as well as the proper culprit (János Derzsi) and an English detective (István Lénárt).

In principle, the pairing of Tarr and noir makes sense — several stylistic and thematic genre tenets were present in Tarr’s oeuvre up to that point, including his signature high-contrast black and white cinematography, femme fatales (Damnation), webs of secrets and treachery (Sátántangó), and mysterious strangers (Werckmeister Harmonies). Money, that classic noir mechanism, remains as a key plot device in The Man from London. Through a driving force in earlier Tarr pictures as well, here the plot mechanics aren’t set forth from a desire to acquire money, but the Dostoyevskian repercussions of what happens after its been acquired. It’s here that one might begin to identify to the film’s potential shortcomings: for a filmmaker whose body of work is so grounded in themes of desperation, the need to reorient and build tension is hobbled when that desperation is diffused early on.

As with Werckmeister Harmonies and The Turin Horse, Tarr shares a directing credit with his wife and editor, Ágnes Hranitzky, a creative collaboration that continues to be too often discredited and overlooked. Adapting a screenplay from the Simonen’s novel marked the first time since Damnation that the filmmaker hadn’t worked with source material from novelist László Krasznahorkai, though Krasznahorkai was credited as the film’s secondary writer. With familiar contributions by director of photography Fred Keleman and composer Mihaly Vig, whose ghostly score carries the film through several of the extended, expertly choreographed traveling shots, it retains the look and feel of a Tarr effort.

And its locations will be familiar to anyone who has spent time with Tarr’s films: ascetic offices and domestic spaces, damp bars, and rainy alleyways. The variations come in the forms of the exteriors, which recall the foggy ports that would have been familiar to the French poetic realists of the ’30s and ’40s, even though these were shot in Corsica.

If the settings and production produce an uncanny effect when watching The Man from London, it’s doubled through the oft-criticized approach to casting and dubbing. “The shoot took place in our own languages, which was as chaotic as the Tower of Babel,” says Tarr in a DVD extra. The Man from London wasn’t Tarr’s first experience working with foreign performers (German actors Lars Rudolph and Hanna Schygulla were dubbed for their roles in Werckmeister Harmonies) but the maladroit dubbing of Swinton into Hungarian is one of several moments that forestall the immersion Tarr and Hranitzky work to foster. “Just don’t bother with the subs,” says Tarr in that same interview, suggesting the visuals are the films superlative element, a request perhaps more easily followed in films not adapted from plotty noirs.

Case in point: Tarr and Hranitzky’s minimal The Turin Horse, their only feature since The Man from London, and one that had been designated to be the last before Tarr decided to produce new work for his exhibition at Amsterdam’s EYE Film Museum in 2017. The exhibition, which in part offered a retrospective look at the filmmakers’ body of work, provided an opportunity to examine Tarr’s legacy as a whole.

An additional, complex relationship with genre emerges when examining the The Man from London with the distance of a decade: most notably the idea of a “slow cinema” movement, popularized at a cohesive, distinct movement-cum-genre in the late-2000s but retroactively applied to Tarr’s work as well as progenitors, such as Tarr’s statesman Miklós Jancsó. While an outlier in Tarr’s oeuvre, if anything the idiosyncrasies of the awkward (through still-respectable) The Man from London might serve to further reveal and reify such codes of slow or contemplative cinema and its frequent efforts to trouble traditional narrative — whether through documentary impulses or elongated takes. By working outside of his familiar context, the tensions at work in The Man from London — between atmosphere and plot, between realism and impressionism — perhaps reveal the mechanics of the filmmaker, his team, and cinematic realm more clearly than the masterworks. A true mouton noir.