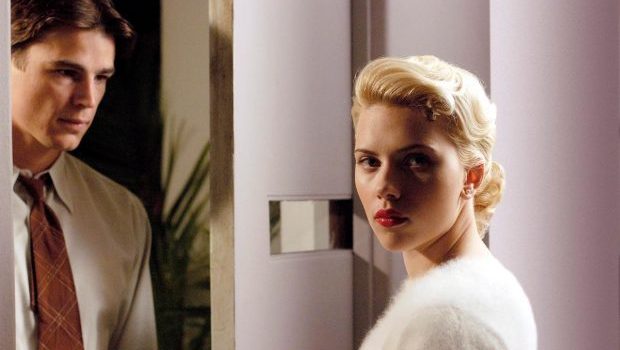 I saw The Black Dahlia the day it opened in the fall of 2006. I can safely say it was one of my favorite moviegoing experiences. My husband and I saw it at AMC River East 21, which is one of Chicago’s largest multiplexes. The showing we went to was sold-out. There must have been 400 people there. The movie started, everyone was quiet and seemed excited for the celeb-packed whodunit we were about to see. Slowly, muffled giggles could be heard from different points of the theatre, mostly whenever Aaron Eckhart or Josh Hartnett mumbled “Fire and Ice.” By the middle of the movie, people were openly laughing at Hartnett’s silly, serious narration. Everyone went ballistic when, referring to the resemblance between Hilary Swank and Black Dahlia Elizabeth Short, Scarlett Johansson yells, “She looks like that dead girl!” We went even more ballistic when a woman sitting near me in the audience screamed, “She doesn’t look anything like her!” Which is true — they don’t look alike at all. After that, watching the movie was pure Mystery Science Theater 3000 territory. No one cared how the mystery ended; they just enjoyed how utterly preposterous and sordid The Black Dahlia is. No one walked out or asked for their money back.

Many of Brian De Palma’s movies walk that fine line between comedy and drama, camp and so-called art. His movies are as entertaining as they are unpleasant. Watching Pacino snort his way through Scarface is about as fun and horrifying as watching the rape in Redacted. Mysteries and thrillers such as The Black Dahlia, though, are supposed to be slick and narratively satisfying, like lengthy episodes of NCIS or CSI with better actors and source materials. People need the illusion that everything in life, even death, can be wrapped up, solved, and tied with a tidy bow. The fact that The Black Dahlia is such a goddamn mess is both daring and confounding, considering it’s based on one of James Ellroy’s most-loved novels. This movie is dense with atmosphere and details, but still feels as if it’s about nothing specific. It contradicts itself minute by minute – first it’s a boxing movie, then a period piece, then a cop drama, then back to a boxing movie, and so on. It somehow can’t be all these things simultaneously.

A telling line delivered by Scarlett Johansson when asked who she wants to see win in the boxing match between Lee Blanchard and Bucky:

“For civic reasons, I hope the LAPD is ridiculed for perpetrating this farce.

And, for aesthetic reasons, I hope you both look good with your shirts off.”

These are divided characters in a fragmented world.

What it really feels like for the first thirty minutes or so are two little boys with ADHD playing cops-and-robbers in their backyard. Every gesture, every line, even the transitions between shots seem exaggerated much in the same way as all of our games of make-believe. The movie struggles for details, somehow mimicking the task of Blanchard and Bucky. The actual Black Dahlia doesn’t even enter into the equation until nearly a quarter of the way through. Imagination time is interrupted by murder and at least gains the pretense of a focused narrative. At this point, the boys become interested in girls. Or girl, specifically.

Like Dana Andrews in Laura and countless other mysteries, Bucky, Blanchard, and nearly all the rest of the men become obsessed with this movie’s dead girl: Elizabeth Short, The Black Dahlia herself. No other woman can compete, save for the alleged Dahlia lookalike, Swank’s Madeline Linscott. What is it about dead women that make them so inviting? Enticing? Not necessarily in a sexual sense, but in a kind of necro-projection kind of way? In many respects, the corpse of a woman is the ideal vessel for the hopes and desires of the men burying her. She can be anything they want her to be – a dream girl (Bucky’s ideal), an opportunity to retroactively be a hero (Blanchard’s take), a slut who had it coming (Elizabeth Short’s father’s opinion), on and on. The ultimate fantasy. Even James Ellroy himself was obsessed with the Dahlia. He transferred the feelings he had for his mother, also a murder victim, onto the Black Dahlia as a way to deal with the tragedy. Dead women are perfect because they can’t talk back, can’t correct you. There’s no way a real (a.k.a. living) woman, like Scarlett Johansson’s Kay, can ever compete if men in her life choose to take part in these fantasies.

De Palma brilliantly embraces this fucked-up misogyny on screen. The only two moments the physical body of Elizabeth Short (Mia Kirshner) appears in the movie are after she’s already dead. Her body is found on the side of the road, cut in half with a Glasgow smile carved on her face, but De Palma defies typical mystery / horror conventions by not displaying her mangled body in its entirety. Instead, he basically only shows the enthusiastic crowd of men – cops, reporters, and the like – hovering over her, taking notes and photographs, muttering about the case. A single shot is dedicated to showing Elizabeth Short’s face – when a hungry crow pecks away at her cheek. An apt metaphor. The other moment the physical presence of Elizabeth Short is on screen is in the next scene – her autopsy. Again, men hover. One of the cops asks, “Is it okay if I smoke?” The doctor jokingly replies, “She won’t mind!” Elizabeth Short is already no longer a woman, no longer someone to be courteous and considerate of. The rest of the movie does its best to project Elizabeth onto other women and objects – on movie screens playing her porn and screen tests, onto gals like Swank’s Madeline who are more than eager to be the living-dead fantasy of Bucky’s corpse dreams. Madeline is this Ellroy universe’s Lynn Bracken, except she’s made up to look like a beautiful dead girl instead of a movie star.

Though The Black Dahlia is a mess no matter how you slice it (pun unintended), a few elements shine throughout – women are figments, fantasies, and fuck toys. Whether or not that’s funny is up to you.