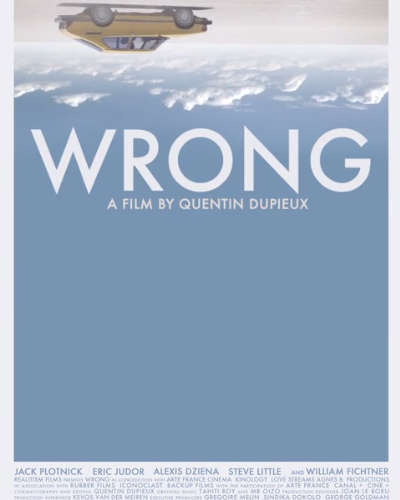 In Quentin Dupieux’s follow-up to his wacky Rubber, a film about a psychotic tire that uses telekinetic powers to blow people up, the French filmmaker maintains his unique blend of absurdity while balancing it out with a more heartfelt story. On its surface Wrong is a tale about a man whose loses his dog, but beyond that it’s a surreal tableaux full of abstract metaphors that will delight some and irritate others. It’s a style of filmmaking where everyday occurrences become bizarre abstractions of reality and characters behaviors are more reflections of ludicrous oddities. Yet for all the seemingly randomness of Wrong, there is a definite logic to everything despite being constantly unpredictable.

The opening scene begins with a group of fireman idly standing around a burning van, while texting and generally ignoring the inferno near them. It immediately sets the stage for the tone about to continue. One morning Dolph, played with subtle eccentricity by Jack Plotnick, wakes up to find that his beloved dog Paul has gone missing. Not sure what to do, he calls a pizza delivery company after receiving a flier in the mail to take his mind off of Paul. After debating the merits of the logo on the flier, the phone call sets off a chain events that will effect the characters in random unforeseen ways. As Dolph tried to continue his daily routines in life, he is overwhelmed by the emotional loss of his best friend and tries desperately to uncover the truth about what happened to Paul. What makes Wrong so delightful is the way it subverts traditional cinematic conventions by twisting viewers expectations of what makes sense. Its the uncertainty of what each scene holds that makes them oddly compelling. Some examples of these oddities include a travel agency office where it’s raining inside, a palm tree that randomly transforms into a pine tree and clocks that when they hit the top of hour display 7:60 AM. In addition, the colorful cast of secondary characters introduces a wide spectrum of peculiarity. From a dog detective (Steve Little) with a polaroid camera who hopes to inception a piece of Paul’s excrement, to the enigmatic Master Chang (William Fichtner), whose books on dog telepathy might hold the key for Dolph.

If any of the above sounds too offbeat then Wrong will most likely frustrate more than fascinate. However, there is a lot to admire for adventurous moviegoers who want an experience unlike most other films out there. There is an argument to be made that the film has no point, yet by the end there is a real emotional connection with Dolph’s existential struggle to find his long lost buddy.

Dupieux is a true cinematic visionary with Lynchian flair (and even some Maya Deren-inspired avant-garde touches), who impressively juggles writing, shooting, editing and music-making (under his Mr. Oizo pseudonym), with electronic atmospheres that heighten the overall mood. Filled with off-kilter humor, delightfully surreal vignettes and a surprisingly heartfelt connection to the protagonist, Wrong is a film so insanely confident and unashamed that it’s hard not to admire its originality even if it sometimes doesn’t seem to make sense.