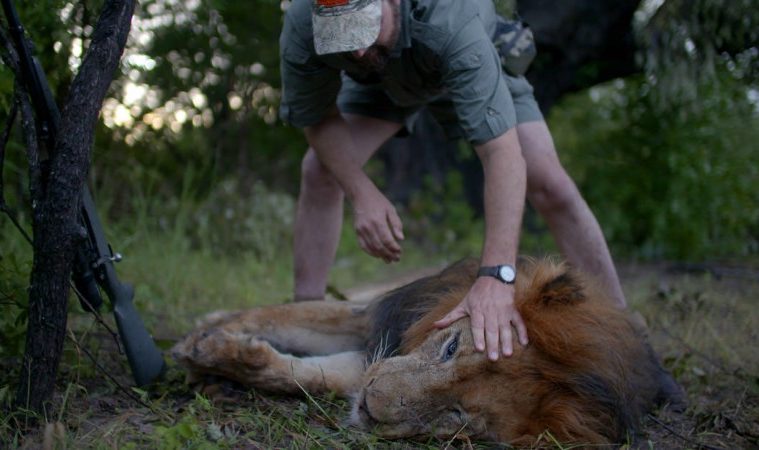 Somewhere in America, a man named Philip teaches his young son how to take down a trophy buck. Rifle in hand, eye peaking through the scope, the kid takes the shot. Direct hit. The father makes sure to get a couple of photos of his son, holding up the hunted, proud smile on his face. Moments later, we are in South Africa, where Rhino breeder John Hume and his team find a rhino, sedate it, and trim it’s horns as a means of protection, so poachers will ignore the lesser stumps and move along.

It’s an interesting opening to Trophy, a complicated look at big-game hunting from director Shaul Schwarz. Regarded as sport to many, orchestrated murder to many others, the coming extinction of elephants, rhinos, and lions comes ever closer, with dwindling numbers that cannot be ignored.

At the Safari Club International’s Annual Hunters’ Convention in Las Vegas, hunting experiences are auctioned and offered at astronomical prices. Meanwhile, Pieter Potgieter, president of the South Africa Predator Association, laments the ongoing preventative measures imposed on big-game hunting by “bureaucrats.” The argument is basically “if it can play, if it can stay.” If the Canadians and Americans (who make up 70% of the big-game hunting industry) are prevented from hunting in Africa, the incentive for industry and, in turn, of conserving these endangered animals will go away, resulting assuredly in extinction. As long as people want to hunt these creatures, they will be inclined to keep breeding them.

As Philip puts it: “The bible says ‘he gave dominion over all of the animals,’ and dominion comes with responsibility but it also means it’s the right to use.” At one point, Philip finds himself in the middle of an anti-hunting protest in Las Vegas, chatting with furious protesters and arguing how a lot of the money hunters push into the big-game economy ultimately help the conservation movement. He’s mostly met with fire and spit.

Schwarz is determined to give us the full view of this issue, and it’s much appreciated. For the most part, the camera allows for the action to take place. We spend a few minutes with an officer in South Africa, who watched a fellow officer die while trying to apprehend poachers one day only to be assigned to kill an elephant to protect a local village the next. He describes what it feels like, watching an elephant die: “[it] turns from this beautiful animal to this floppy mess of gray skin.”

There’s no clear answer for what to do here, like so much in this world. For every groundswell of social media support for a Cecil The Lion, there are a hundred (a thousand!) poaching atrocities committed in the name of protecting local farmers and fueling a growing hunting economy, and some of that is certainly legitimate. Hume, a self-proclaimed savior of rhinos, takes the South African government to court, attempting to legalize the sale of rhino horns. (He would ultimately win the case.) His claim is that in order for him to continue operating his farm, which houses about 1,300 rhinos while breeding just under 200 a year, he must turn a profit on the horns he cuts off every two years. Making an illegal trade legal, to save an animal species. It’s an imperfect solution, if it’s a solution at all. And still the hunters hunt.

Trophy premiered at Sundance Film Festival and opens on September 8.