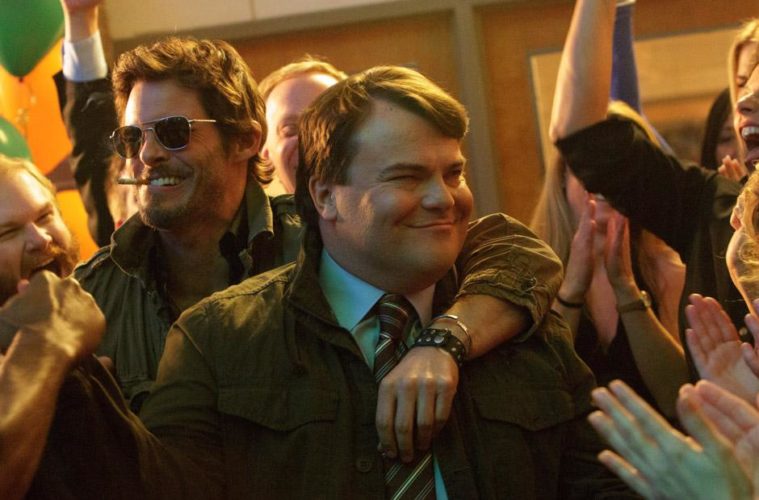 In The D Train, written and directed by Andrew Mogel and Jarred Paul, Jack Black digs into the deepest, saddest part of our social psyche to create a character that’s immensely unlikeable and imminently relatable. His name is Dan Landsman, and he has settled. He went to high school in a Pittsburgh suburb, married his high school sweetheart (an underused-but-still-great Kathryn Hahn), bought a home in a Pittsburgh suburb and got a steady job in the Pittsburgh area for a gun-shy boss (Jeffrey Tambor). Though the self-appointed head of his high school class’ alumni committee as they plan their 20-year reunion, nobody likes him. At all.

Enter Oliver Lawless, played by a very game James Marsden. Dan sees Oliver, a fellow graduate, starring in a national commercial spot for Banana Boat and is immediately smitten. He concocts an overtly-elaborate plan to convince “celebrity” Oliver to come to their reunion, a cockeyed move that will presumably convince all of the other graduates to attend as well. As everything is put in place, we find Dan putting his job and marriage in jeopardy just so he can impress the most popular kid in high school 20 years later. It’s in Los Angeles, where Dan meets Oliver, that the movie peaks. Mogel and Paul present Oliver as an icon of beauty and cool, only to un-package him to be a struggling, never-was, drug-addicted actor in a brutally embarrassing scene involving a clever cameo. Ultimately, Dan and Oliver hit it off, both using each other in different and equally unhealthy ways. All of this culminates in a scene that will alter the course of the rest of the film.

Sadly, this new direction feels muddled and confusing most of the time, as though Mogel and Paul knew where they wanted Dan and Oliver’s relationship to go but didn’t quite know how to integrate that into this bigger world of high school politics and family dynamics. There are plenty of genuinely funny moments from top to bottom, with Black giving one of his very best performances along with Marsden, who seems destined to be the most attractive underrated performer working today.

By the third act of The D Train, there’s a lot of ideas being thrown around. Stuff like male sexual identity and perceived social status collide as the climactic reunion begins, but none of it feels fully thought out. Just as Dan must jump in front of all of his lies, Oliver must admit to himself who and what he really is. There’s honesty here in these revelations, but they exist in world that’s built to show us all of the things we don’t like about ourselves without fully understanding what any of it means.

The D Train premiered at Sundance Film Festival and will be released by IFC Films.