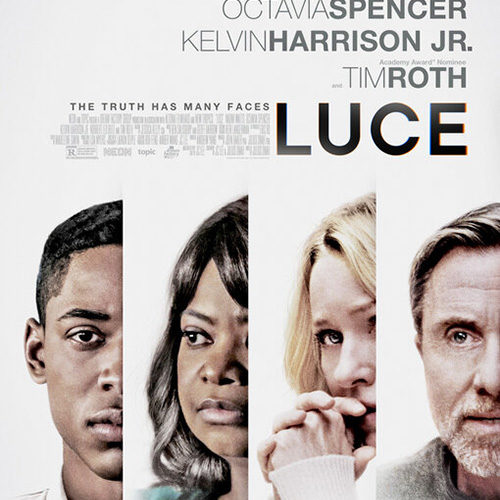 Star of the debate team, straight A student, soon to be high school valedictorian: from his handsome looks and stellar CV, Luce (Kelvin Harrison Jr.) is the shining example of the all-American teenager—minus, of course, his history as a child adopted from war-torn Eritrea. As a name, Luce means “light” in Latin, the idea being Luce, a now-beaming youth in the Arlington, Va., area, was removed from unimaginable darkness. But there’s another spin on the allegory here that’s just as meaningful: when people are placed into boxes—stereotypes, to be clear—only so much light can filter in and out of them.

For a kid like Luce, being an “Obama” is one of these boxes. He’s polite, works hard, and everyone wishes the world for him. But he’s also got a smarmy side: Kelvin Harrison Jr.’s Cheshire Cat-like grin and tricksy playing-dumb persona (“I’m very good at acting surprised,” he says at one point) reveal his character as someone nimbly capable of manipulating a deck that remains stacked against him. Could the brightest kid in school really be hiding illicit fireworks in his locker?

After reading a troubling piece of Luce’s homework, Ms. Wilson (Octavia Spencer), one of Luce’s teachers, seems to think so, and she’s compelled to invade Luce’s personal privacy and speak to his parents (Naomi Watts and Tim Roth) on the issue, which she claims is one of school security. Unconvinced, yet concerned Luce might be hiding something, mom and dad confront their son, who, in response, begins calling his mother by her first name. (Ouch.) As Ms. Wilson continues her crusade against Luce, his parents opt to give him the benefit of the doubt, prompting us to ask: is their faith in their son coming from a place of white guilt, or is it an act of genuine love?

Doubts abound. Either way, Luce’s parents have worked hard to give him a better life, a privilege so many other kids that look like him will never have. To Luce, that’s a double-edged sword: while it’s nice to be excelling in life and academia, the mounting pressure to do so is just as suffocating as succumbing to institutional racism. Before the conclusion to this nearly two-hour chess match, director Julius Onah and screenwriter J.C. Lee—who also wrote the source play—have drawn several question marks above each character, who consistently betray what we first think of them. (Spencer, in particular, is given one hell of a role, and a key face-off scene with Harrison Jr. could easily be award-winning.)

It’s these questions marks that make Luce so absorbing, because what you bring into the film is just as relevant as what you take from it. With its deconstruction of stereotypes and how people of color are set up to fail (a similar dissection of racial expectations burns in fellow Sundance stunner Native Son), this film, ultimately, is a major work of contemporary American cinema: complex, beguiling, and full of meaty discussion points that will challenge audiences throughout 2019 and beyond.

Luce premiered at the Sundance Film Festival and opens on August 2.