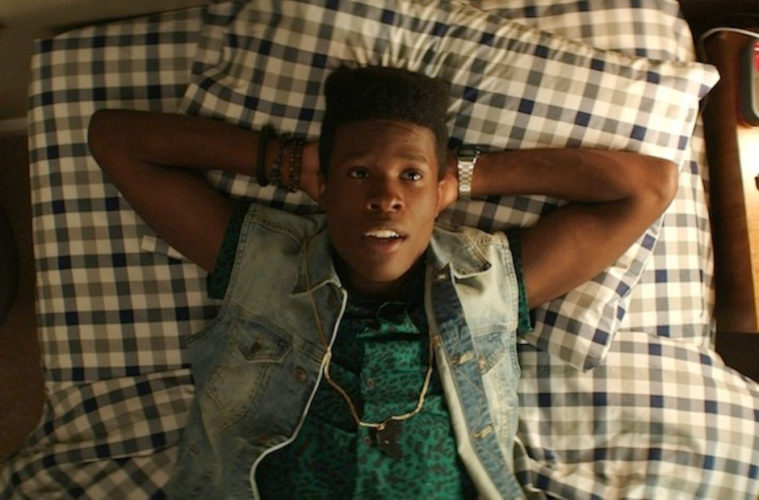 Dope opens with a sense of energy proclaiming that writer-director Rick Famuyiwa has something to say, and he’s going to do it in his own particular way. Difficult to quantify, the Sundance drama is many things: a love letter to the 1990’s era of style and hip-hop, a coming-of-age story, a crime drama, a romance, an examination of social media, and an offbeat comedy. While some of these strands don’t entirely excel, Dope is often a refreshingly lively and passionate work of filmmaking.

Our main high school trio is made up of Malcolm (Shameik Moore, in what will certainly be a break-out role), Jib (Tony Revolori, who had his break-out earlier last year with The Grand Budapest Hotel), and Diggy (Kiersey Clemons), a group self-described as geeks who love “white things,” including TV on the Radio, manga comics, and Donald Glover. They get ridiculed at school for their nostalgic and distinctive tastes, but far worse than someone stealing a pair of their shoes is the gangs that occupy their neighborhood of Inglewood, California, also known as “The Bottoms.” In a powerful tonal shift (and not the only one to come), Famuyiawa introduces the violence by showing a fellow geek getting gunned down while in line at a fast-food restaurant. As his blood-splattered Gameboy hits the ground, the scene ends with an endearing joke, revealing that Dope is here to not only thrill and provoke, but entertain. It mostly does, for at least the first two acts, if one can suspend some of their disbelief along the way. The plot truly kicks in when Malcolm and the gang get invited to a nightclub by a local gangster, Dom (Rakim Mayers aka A$AP Rock), and he partially agrees due to the charms of Nakia (Zoë Kravitz), a former fling of Dom’s who is trying to make it out of the dangerous neighborhood by getting her GED. After a tricky entry, Malcolm and his gang make it into the nightclub, only to have things quickly turn violent when a rival gang enters guns ablazing. Dom, unknowingly to Malcolm, puts his stash of drugs and his piece in the high school senior’s backpack and sends him off. The crime drama storyline then begins in full force as they get hunted down by the rival gang all while trying to decide what they’ll do with the dope.

Running for nearly two hours with an ambitious sprawl, Famuyiwa hits a snag as the offbeat characters start to pile up along with the many strands he attempts to establish and wrap up. Reminiscent of Go, Boyz n the Hood, or even Pulp Fiction with its manipulation of chronology, Dope is ultimately most engaging when it’s simply the three title characters bantering about their pressing criminal situation as they get in far over their head. Famuyiwa wants to have his (pound) cake and eat it too, and the go-for-broke approach is ultimately appreciated even if some of the goofy aspects tend to hurt the overall impact. In touch with today’s generation, his version of Snapchat, Bitcoin, and a viral social media outbreak (depicting the trio’s band and newly established drug operation exploding) are convincingly thrown into the visual mix, also including freeze and split frames to help move the story along.

While Famuyiwa largely entertains for the first two-thirds, an evocative sequence breaking the fourth wall confronts the audience regarding Malcolm’s background and future based on his race. It’s another fearless move by the director, but feels tonally at odds and out of character with what came before, considering the powerful depiction of his violent surroundings go much further than any direct monologue could do.

Backed by a fantastic 90’s hip-hop soundtrack (as well as original songs by Pharrell Williams), those that make up main ensemble each get their moment to shine with all of their eccentricities. Going back to his independent roots, Famuyiwa’s Dope is a witty, highly entertaining blend of a multitude of genres, one that could truly be great if a bit more compressed.

Dope premiered at Sundance Film Festival and will be released by Open Road.