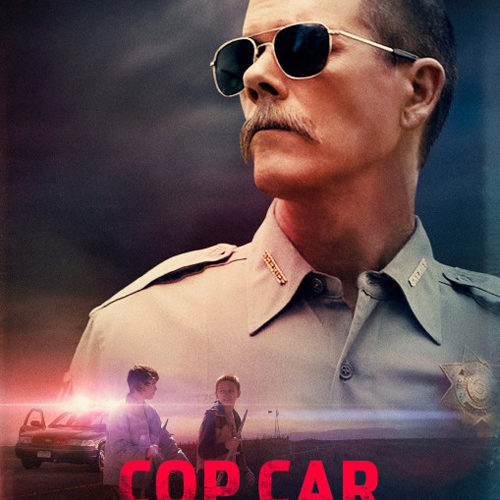 For a good long while, Cop Car, directed by Jon Watts, plays like a wonderful genre picture, featuring two impressive lead performances from child actors James Freedson-Jackson and Hays Wellford. The premise is refreshingly simple: somewhere in Middle America, Travis (Freedson-Jackson) and Harrison (Wellford) stumble upon an empty cop car in the middle of nowhere. Initially spooked by the vehicle, the two kids quickly give in to their curiosity and drive off with the thing, doing exactly what you would expect two kids with a car would do. Watching the duo figure out how to put the vehicle in gear is entertaining all on its own. This series of interactions between our two stars is the strongest in the film.

We soon learn that the owner of the car is, of course, a corrupt and murderous cop (played by Kevin Bacon, who’s also executive producer here) in the middle of taking care of some dirty business. He’s getting rid of a dead body nearby when the two youngsters boost his car. His introduction into the story and the comical mad dash that follows propels the pace forward, up until a point.

Soon enough, things slow down. The kids run out of things to do, and they start playing with the guns in the cop car. It’s a squeamishly playful scene that goes on just long enough, but unfortunately foreshadows a tonally unbalanced climax. Camryn Mannheim appears in a silly role that serves only to fill plot holes in the spare narrative, and Shea Whigham shows up in a fun, one-note turn. Bacon is similarly cardboard, a baddie without much zest and a bit too much circumstance. There is nothing complex about this man, and after a while it’s a bit tiring watching this grown man chase after two children that we’ve grown quite fond. While Watts and Christopher D. Ford, who co-wrote the screenplay, do well to build tension in spots here and there, but it never amounts to much.

After all is said and done, Cop Car feels like half of a movie with no real ending. A number of creative decisions are made to get to a narrative fork in the road for these two kids that feels transported from another, darker movie lacking in the playful beginnings of this one. There’s a lot to like here, just not enough to recommend.