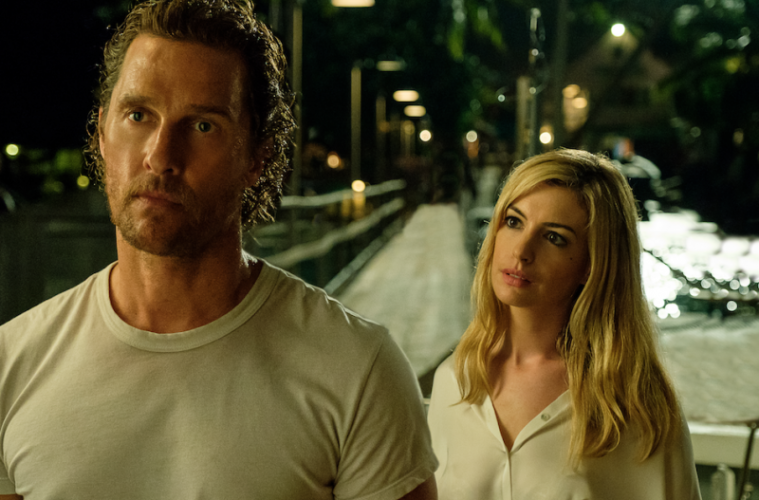 ‘Serenity’ Trailer: Matthew McConaughey and Anne Hathaway Go From Space to the Sea

“Around here they like to say ‘everybody knows everything.’ But what if the truth was ‘nobody knows anything?’” Matthew McConaughey’s opening line instills an air of mystery over the first trailer for Serenity – the newest original crime thriller from writer/director Steve Knight.

The film centers around McConaughey’s Baker Dill, a fishing boat captain who lives and works on the peaceful Plymouth Island. Things go awry for Dill when his ex-wife Karen (played by Anne Hathaway) resurfaces and pleads for protection from her abusive now-husband (played by Jason Clarke). As heard in the trailer, Karen wickedly wants Dill to “take him out on your boat and drop him in the ocean for the sharks.”

It’s been a big week for both McConaughey and Hathaway. Another new McConaughey film White Boy Rick just got a trailer this week, and Hathaway’s Ocean’s 8 hits theaters this weekend. Previously, McConaughey and Hathaway have proven their strong on-screen chemistry in Interstellar, when they played a pair of Earth-saving astronauts. Four years later, they’re back on screen together, under Knight’s direction. When speaking about Serenity to People Magazine, Knight explained his enthusiasm for the A-lister’s collaboration: “Some of the scenes between them are the most electric I have ever been involved in… Matthew and Anne are two of the best actors working anywhere in the world.”

Steve Knight’s previous works include Peaky Blinders and Eastern Promises, which he wrote; and the Tom Hardy-led Locke, which he wrote and directed. Alongside McConaughey, Hathaway, and Clarke, the film’s cast features Diane Lane, Djimon Hounsou, Jeremy Stron, and Kenneth Fok.

From the creative mind of Oscar nominee Steven Knight comes a daringly original, sexy, stylized thriller. Baker Dill (Academy Award winner Matthew McConaughey) is a fishing boat captain leading tours off a tranquil, tropical enclave called Plymouth Island. His quiet life is shattered, however, when his ex-wife Karen (Academy Award winner Anne Hathaway) tracks him down with a desperate plea for help. She begs Dill to save her – and their young son – from her new, violent husband (Jason Clarke) by taking him out to sea on a fishing excursion, only to throw him to the sharks and leave him for dead. Karen’s appearance thrusts Dill back into a life he’d tried to forget, and as he struggles between right and wrong, his world is plunged into a new reality that may not be all that it seems.