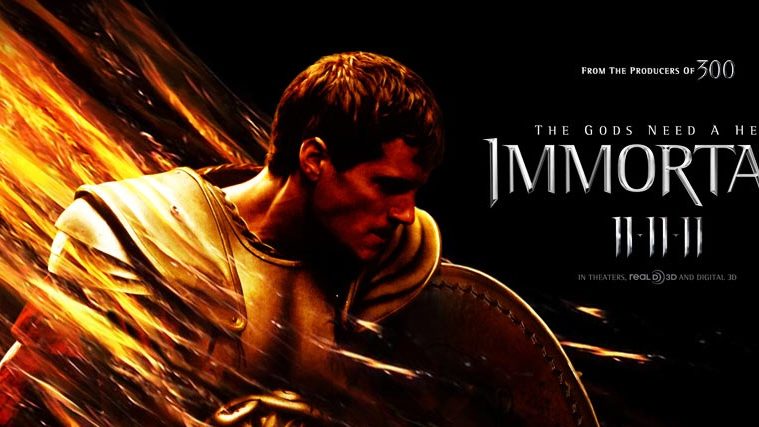 Immortals, directed by Tarsem Singh, (The Fall, The Cell), brought us some laughs, some great clips, and a great cast (Henry Cavill, Freida Pinto, Luke Evans, Kellan Lutz, Mickey Rourke, Stephen Dorff, John Hurt) along with him to the Immortals panel at comic-con this past weekend.  Below are some recaps, the new poster, and the full panel video:

We were shown the new trailer along with a rather long 3D clip of a fight sequence involving Luke Evans (as Zeus) and some of his Olympians fighting Hyperion’s disfigured soldiers.  Zeus, along with 4 Olympians, fight, stab, decapitate, dismember, and thoroughly bloody their way through the soldiers.  This showed a far darker side of Immortals than I was anticipating, with 3D blood floating in slow motion across the screen as each attack was delivered.  After only Zeus and one Olympian survive, Zeus pulls two massive golden ropes that bring down huge statues supporting the mountain of which they are inside.  As the mountain begins to crumble, we see a shot of a huge army outside the mountain start fleeing for their lives.  This clip really gives us a great taste of Tarsem’s style and what he brought to the table with this film.  Seeing this extra footage really makes me eager to see this film more than the trailers themselves. знакомства с иностранцами

As previously posted, check out the new poster revealed at Comic-Con, by clicking the image below. Check out a video of the full panel below thanks to seat42f:

What do you think of all the new Immortals media?  Are you more interested in seeing the film?