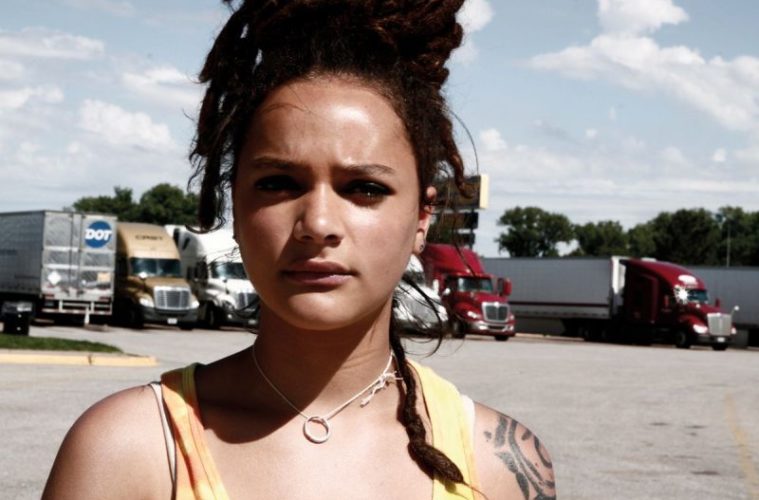 A 163-minute road trip to an Americana we rarely see onscreen, Andrea Arnold’s American Honey is a polarizing film. Perhaps best described as a Grapes of Wrath or On the Road for and about millennials, Arnold depicts a wayward group that are disconnected with their country. They’d rather sell their bodies than live in a capitalist-run society trying to live the “American dream.” The structure runs constant repetitive circles, and yet we are fully engaged. There’s a sense of unimaginable freedom in Arnold’s filmmaking, and it makes for a vital and great American movie.

Newcomer Sasha Lane plays Star, a lost American soul that decides to hop on-board a bus full of magazine-selling kids that go cross country to make money by vending subscriptions. On the way to nowhere they argue, fight, make love, and have bus ride sing-alongs to Top 40 radio. In her first role, Lane is a natural and perfectly captures the isolation and resistance that is slowly creeping up with American millennials, more specifically their search for purpose in a world filled hopelessness.

We spoke to Lane about her peculiar, unlikely story:

The Film Stage: So tell me how this whole adventure with the movie started.

Sasha Lane: It was the middle of spring break. I was at the beach in the middle of Panama City. And that’s such a big beach with so many people, but she noticed me for some reason. My spring break was going pretty crazy. I was getting kicked out of hotels and it was just shitty. She came up to me and just said, “I’m Andrea. I’m doing this movie. I know this sounds weird,” and I don’t really remember what happened next. It’s all just a total blur. I told her she could come to my hotel that night, and I didn’t think she’d come. I was kind of surprised when she did. She called me and said, “I’m outside.” I thought to myself, “Oh, this woman is serious.” My friends actually Googled her in the hotel room to make sure this was safe.

Had you seen any of her films before?

No, but after that I watched Fish Tank and she told me that the way the film followed Mia was the way it would follow me. The whole aesthetic of it, the music, I really enjoyed it and it got me excited for making the movie.

How was she as director?

She’s so open and she loves people, she loves chaos. She also gave me advice and just said, “Be you. I chose you for who you are.” So I felt comfortable. We built this trust that lasted all the way through the movie shoot.

So not only did you end up becoming an actress, but the film then gets selected for Cannes. How was that experience?

Nothing will top Cannes. That was the first time we all saw the movie. There was so much energy in that room. A lot of love. It was also such a surreal and intense experience. There was so much love in Cannes. I’m just getting emotional right now thinking and talking about it.

Did your parents see the film? What was their reaction?

My dad and stepmom saw it. My dad walked out — I don’t really know why and to what extent, but we don’t really talk about it. But they supposedly both loved what they saw.

Your dad walked out?

Yeah, I haven’t really spoken to him about it, but I understand. I have no hard feelings. Everything happened so suddenly and all of a sudden there I am acting in a big movie. It can be an overwhelming experience.

It felt weird. While we were shooting the film, I wasn’t really sure what Andrea was trying to create, but once I saw the film it felt like an epiphany. It just all gelled. I was also thinking of all the experiences and moments I had with each individual scene and it’s all just such a beautiful thing.

How many hours of footage did you guys get?

There was one-hundred hours worth of film, a lot of those were scenes in the van. The movie also felt long to some, but there was just so much more we shot.

How did those work out exactly? They feel so organic and communal onscreen.

We were just trying to get into a lot of the music Andrea was playing for us. You’re loose, you’re having fun and you just get into it. You were allowed to be like, “I’m not feeling it today” and that made it very organic and real. We would think of these random songs and get them played, but if Andrea couldn’t get them approved we wouldn’t be able to use them.

Did anything else change from the original version Andrea had in mind?

The ending changed because she ended up taking on who my character was and how I changed over the course of the movie. I don’t know how it changed, but I was told it was very different.

The cast also seemed to be a very tight unit onscreen.

Yeah, we all became friends. A lot of that excitement and fun onscreen was very genuine and real. A lot of love. Also, many of the hotels we stayed at had bed bugs so we’d hang out a lot outside and we bonded that way, until we could get another shitty hotel which was most probably across the street from the other one. We stayed in those motels and every day was shot like it was that day. The film feels like life.

The film tackles a side of America that we rarely see onscreen.

There’s a lot that people don’t know about that part of the country and some people even refuse to see it. These are parts that don’t get looked at but should be looked at. People need to be aware of what’s going on there. I know about that part so well: the people, the poverty. I am that kid that gets discarded and pushed to the side. I am that kid that has dreams that nobody bothered to care or give a chance. There is a lot of beauty and light in people and the communities that are formed in places like that.

How would you describe in one sentence this whole experience?

It just felt really whole, and it felt like the right decision to make, to say yes. I think that was what I was looking for, but I didn’t know what exactly it was. It worked out in such a perfect way.

American Honey is now in limited release and expanding.