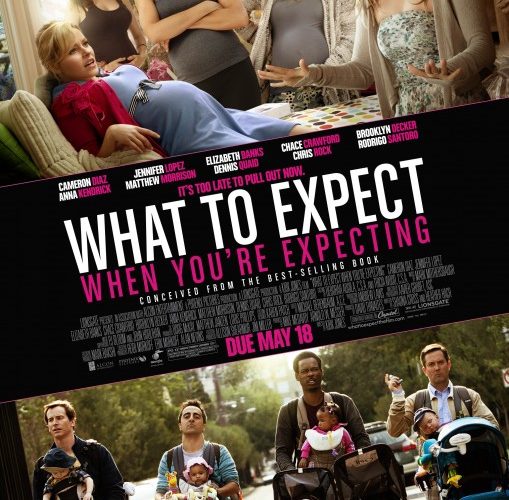 [Review] What to Expect When You’re Expecting

In their hit song, “Hey Jealousy,” the Gin Blossoms suggest that if “you don’t expect too much from me, you might not get let down.” I admit I approached What to Expect When Your Expecting with that attitude and was pleasantly surprised. A departure from the brainless star-studded ensemble of recent Garry Marshall (Valentine’s Day and New Year’s Eve), this is not exactly cinematically nutritious but a pleasant-enough cupcake. The interlocked, primarily Atlanta-based couples the film follows include Wendy (Elizabeth Banks) owner of an upscale baby boutique with husband Gary (Ben Falcone), Gary’s father (Dennis Quaid) and his much younger wife Skyler (Brooklyn Decker), two young food truck-owners Marco (Chace Crawford) and Rosie (Anna Kendrick), the star of a “Biggest Loser”-type of reality show Jules (Cameron Diaz) and her partner from a “Dancing with the Stars”-type show Evan (Matthew Morrison), a freelance photographer Holly (Jennifer Lopez) and her husband Alex (Rodrigo Santoro) – who are in the process of adopting round out the “A” ensemble.

Alex, with reservations is sent to the “dude’s group,” made up of dads that have been there before, which includes Thomas Lennon, Chris Rock, Rob Huebel and Amir Talai. The film progresses much in the manner of another ensemble comedy drawn from an “educational resource,” He’s Just Not That Into You, dispensing advice that seems useful both for women and especially men (much of the movie is made to appeal to us and it’s successful). There are multiple scenarios including (spoiler alert) a miscarriage by Kendrick’s Rosie, who had gotten pregnant from what essentially is a condition haunting single people in their 20’s – you hang out with someone a few times and then have sex with them once (and maybe never call them again). The film handles these moments with as much insight as it perhaps with so many balls in the air, a slight problem in the character development department. Ultimately the film does edge towards working. It’s an effective ensemble comedy directed with whit and energy by Kirk Jones, but it does have one too many scenarios occurring for its own good. Perhaps the “dude’s group” can go, although I did enjoy the insight and comic relief. The most expensive real estate in the world, after all, is the time between the distributor’s logo and the closing credits. There could have been more insight churning here. Another pet peeve is the film’s source material (unread by me) may be largely biological. The women as “mothers” experience the biological changes but rarely a larger emotional arc beyond what we’ve seen on many sitcoms. There are filmmakers that can have it both ways – I’ll avoid evoking Nicole Holofcener. Here’s a film that’s a slave to biology. In nine months it covers a lot of ground, but I wish it had gone that extra mile.

What to Expect When You’re Expecting is now in wide release.