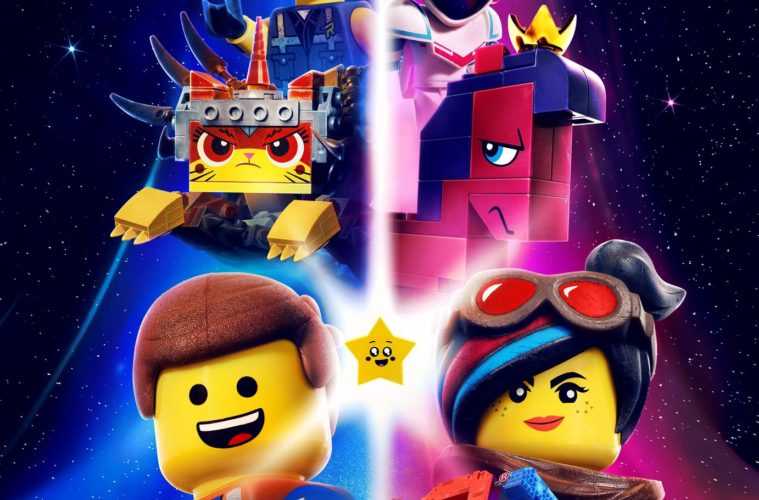 Review: ‘The Lego Movie 2: The Second Part’ is a Stale Sequel

The Lego Movie largely succeeded for two reasons: one, Lord & Miller’s gag-heavy comedic sensibility meshed well with Animal Logic’s kinetic, stop-motion-inspired CG animation style, and two, because the film turned its design flaw—the structural inability to transcend its cynical marketing origins—into its primary thematic drive. The perils of groupthink and corporate mediocrity ran through The Lego Movie, cheekily embodied by its catchy theme song “Everything Is Awesome,” a sinister symbol of conformity in pop disguise. While that created some necessary tension between the text and its capitalist origins, the film’s ideological incoherency mostly ends up neutering that relationship. After all, the endgame of celebrating creative expression can’t have much emotional weight when imagination is inherently circumscribed by The Lego Group’s product line. Still, The Lego Movie was funny enough on a micro-level and visually busy enough on a macro- one for that not to really matter until the third act.

The Lego Movie 2: The Second Part, written by Lord & Miller but directed by Mike Mitchell of Sky High fame, might not share all of its predecessor’s flaws (it trades in Yay, Individuality! as a theme for Yay, Gendered Conceptions of Maturity!, which they also mess up, just not in the same way), but it unfortunately slips into most of the common sequel pitfalls. Familiarity breeds contempt: the song, proverbially speaking, remains the same, except by returning to the same well with more mixed results, its weaknesses are amplified if only by contrast. This isn’t so much a problem with the animation or visual effects, but it’s a drag comedically. The gags aren’t nearly as fast or funny enough (in case you’re wondering, the conceptual Nolan-version-Batman digs, while initially inspired, have officially run its course in this installment), the meta jokes involving star Chris Pratt’s interim Hollywood success fall flat, and there’s a general decrease in background absurdity. Plus, there’s more original music this go-around and, save for a couple songs, most of it is just filler that fails to make any impression. There are some inspired highlights on the voice performance front: Richard Ayoade and Noel Fielding steal the show from the supporting bench and Bruce Willis makes a decent cameo. When it’s all said and done, however, the whole thing just feels a little tired.

The general staleness isn’t helped by The Lego Movie 2’s thematic problems, which are subtler this time around, but still equally frustrating. Lord & Miller, possibly in an effort to address the male-dominated sensibility that runs through their oeuvre, set their sights on gendered creativity this time around. They symbolize this narratively by having the city of Bricksburg become a Fury Road-style post-apocalyptic wasteland following the presence of alien invaders, i.e. younger sister Bianca (Brooklynn Prince) trying to play Legos with older brother Finn (Jadon Smith) in the human world. When General Sweet Mayhem (Stephanie Beatriz) of the Systar System (get it?) kidnaps Lucy (Elizabeth Banks) and friends (read: Bianca takes some of Finn’s minifigures to her room), Emmet (Pratt) teams up with hardened badass Rex Dangervest (also Pratt) to save them. But as the Systar System’s vibrant, friendly atmosphere wins over the deeply suspicious Lucy and her placable company, Emmet learns toxic lessons about maturity from Rex and subsequently threatens to sow disharmony between the two universes.

The broad strokes of Lord & Miller’s ideological playbook here are admirable and sound. Gender fluidity should be encouraged in terms of children’s play, and because of the ever-pervasive cock of the patriarchy (phrase swiped from Marc Maron), at least some of that starts with boys learning that “girl toys” aren’t inherently lame. Moreover, imaginative worlds coded feminine are no less legitimate or serious than those coded masculine, as anyone who has watched self-consciously dark Hollywood franchise entries from the past decade can attest. Generally speaking, and with obvious exceptions, we should accept and assimilate worldviews beyond those targeted towards us. It’s how we create a more tolerant, more diverse world.

However, The Lego Movie 2’s narrowly prescriptive tact basically pushes the whole ideological house of cards to collapse. Lord & Miller write themselves into a corner and eventually have to delineate “good” and “bad,” and they somewhat predictably take the poptimist route. Anything “grimdark” or “grimdark”-adjacent is inherently suspect while anything optimistic or seemingly superficial should be embraced. This is a kid’s film starring literal merchandise, so it makes sense that the message has to remain reductive to be understood, but this still seems unnecessarily dogmatic. For one thing, it doesn’t logically track with the film’s metaphor: Finn’s tastes skew more “serious” than Bianca because he’s older than her, and it doesn’t seem fair to effectively punish him for experiencing a natural byproduct of adolescence that Bianca will likely go through herself. The playing field just isn’t level from the jump. But even if you toss the logic question out the window, it’s a little cringeworthy that the general takeaway tips over from “don’t fear feminine-forward pop sensibilities, dudes” to “blindly accept any and all positive messaging with a bright, colorful sheen, you buzz kill.” Those aren’t mutually exclusive concepts in the real world, but The Lego Movie 2 makes it an either/or proposition.

To put it another way: in The Lego Movie 2, “Everything Is Awesome” essentially sheds all menacing subtext and becomes a sincere mantra in a different costume. Lord & Miller, to their credit, try to split the difference with the more somber companion track “Everything’s Not Awesome,” a hopeful song about trying to make everything awesome just in a less idealistic fashion. The song’s pragmatism is the film’s funniest sustained joke (“Things can’t be awesome all the time / It’s an unrealistic expectation!”), and it’s difficult to ignore the political echoes in lyrics like, “We should maybe aim for not bad / Cause not bad right now would be real great!” Except that The Lego Movie 2 doesn’t practice what it preaches. Everything ends awesomely and all it took was rejecting anything with too much complexity or nuance. Lord & Miller tip their hand in this direction when, in the film’s climax, Rex dickishly spells out The Lego Movie 2’s own real-world metaphor to Emmet. They clearly want to say that you can grow up without losing all innocence or adopting narrow-minded ideas about adulthood, but apparently that also includes “basic media literacy” and “self-awareness,” concepts that, ironically, run through the directors’ entire career dating back to their cult MTV sitcom Clone High. Incoherency might be par for the course, but it tends to go down better with more awesome.

The Lego Movie 2: The Second Part is now in wide release.