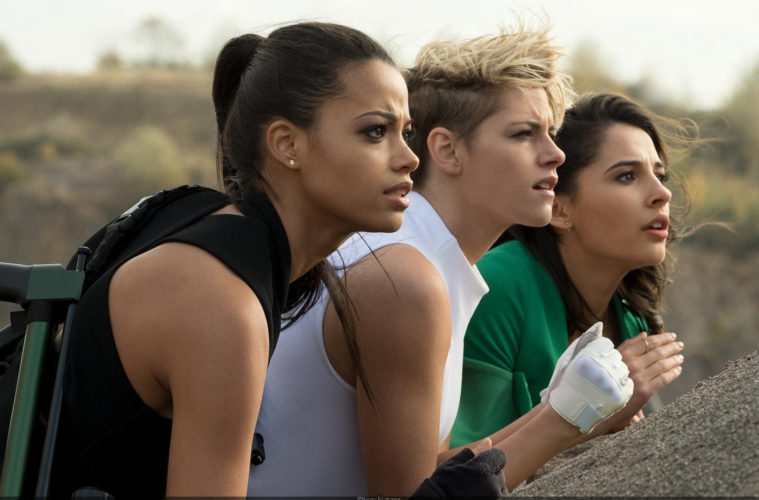 In an era of remake/reboot/dredging-up-old-IP fever, the logical next step was a rebranding of Charlie’s Angels. Written, produced, and directed by Elizabeth Banks, this new iteration is complete with fresh faces and exactly the amount of hollow feminism one might expect. With all the subtlety of a stiletto-kick to the head, Kristen Stewart’s Sabina begins by saying “I believe women can do anything,” setting the tone for the rest of the film which is much more concerned with hammering in that thesis than proving it, cutting to a bizarre stock footage-esque montage of girls of all ages and backgrounds smiling and looking at the camera. Much of it ends up in the unusual territory of substance over style, prioritizing its broad and self-congratulatory message over any truly memorable action beats or character quirks. Whereas the Angels from the gleefully cheesy films from the early 2000s wore their capacity with confidence and understood dominance, Banks feels the need to constantly pump the brakes and remind the audience that women can do anything instead of letting their actions speak just speak for themselves. This is often frustrating because the intentions are so obviously pure but these desires are largely unable to manifest themselves into anything unique. After the cold open, stuffed with attempts at mid-action one-liners (“You swiped right on me! I’m your girlfriend now!”), we are introduced to the lore in the form of Bosley’s (Patrick Stewart) retirement, giving the obligatory background exposition in order to set up the canon. Apparently Bosley is a rank, not a name, and there are several of them across the world (featuring Michael Strahan in potentially the most distracting and confusing cameo ever put to film) since making the Angels an international organization. This addition, supposedly intended to make them seem more far-reaching and impressive, feels more like a reduction of the superiority that came with the title.

The meat of the plot is tied into this familiar premise that women, regardless of how capable, will always be steamrolled by powerful men, articulated in the most cartoonish, on-the-nose way possible in the form of Nat Faxon’s supposed tech genius Fleming, who refuses to take heed of non-Angel Elena’s (Naomi Scott) concerns over the safety of the MacGuffin which will drive the story. She is literally unable to get a word in, which is even acknowledged by the characters, as if Elizabeth Banks is stepping into frame to look at the audience and say, “Can you believe this guy?”

Through an elaborate series of exchanges and battles over the aforementioned device, we are settled into the fun and games of the world, getting acquainted with our leads who are really doing their best to make chemistry happen. While Sabina, Elena, and Jane are as new to each other as they are to us, one can’t help but wish they would get past the awkwardness and just skip to the part where they become the unstoppable team advertised. There are only so many dead-air pauses for cringe laughter before one wishes they would simply get on with it. That’s not to say that it’s all winks and eye-rolls; there are plenty of moments throughout that are worthy of the brand: an elaborate wig-related bit, Ella Balinska hanging out of a moving car, pistol trained on her target, and a spontaneous dance number in the final, glittering set-piece are all welcome injections of energy. Of course, it would be a mistake not to mention the soundtrack, headlined by the wonderfully poppy “Don’t Call Me Angel,” which scores the film throughout. These occasional shining moments, where Banks is clearly confident in the material, give promise for something greater. While its structure as a safe Hollywood piece of entertainment is sure to satisfy the masses, there’s something fundamentally sterile about its sheen that keeps it from being anything more than another Sony product.

Despite patches of wit and flash, Charlie’s Angels consists mostly of tired beats, awkward humor, and the most ham-fisted commentary on MeToo revenge imaginable. Especially when contrasted with such recent success in the same vein as the thrilling and dense Mission: Impossible – Fallout, the bar for momentum and style has been set so high which makes otherwise middling material like this more frustrating than entertaining. There is certainly potential, however, and hopefully the inevitable sequel is able to skip the self-absorption and setups, free to move into something of its own design.